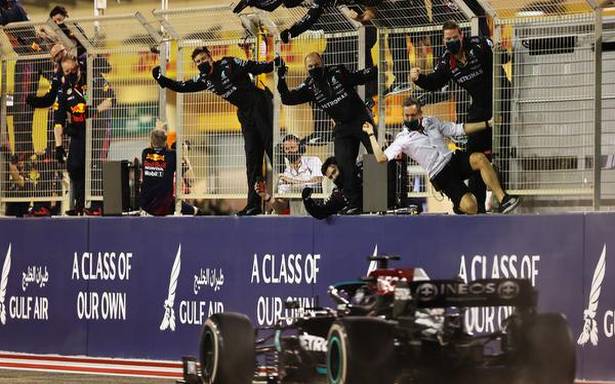 The defending seven-time champion defended with supreme skill over the closing laps in his Mercedes to hold off the Red Bull driver and claim a record-stretching 96th Formula One victory.

Hamilton came home seven-tenths of a second ahead of the Dutchman, who was forced to hand back the race lead in the closing laps after passing the champion with a move that had taken him off the track and beyond the limits.

As expected, Hamilton and his heir apparent delivered an exhilarating exhibition of racing as they stormed to the flag — the pair leaving third placed Valtteri Bottas, in the second Mercedes, to finish adrift by 37 seconds.

It was Hamilton’s first season-opening triumph since 2015 and surprised many observers after Red Bull had dominated pre-season testing and two days of practice and qualifying ahead of the race.

“Firstly, can I just say it’s the first time I’ve seen fans in a long time,” said a delighted Hamilton.

“What a difficult race that was – stopping early we knew it was going to be tough, but we had to cover Max and it was always going to take something pretty special to do it.”

A disappointed Verstappen said: “Of course, it’s a shame, but you also have to see the positives. We’re putting the fight on to them so it’s great to start the year like that”

Lando Norris was fourth for McLaren ahead of Sergio Perez, who had started from the pit lane in the second Red Bull, Charles Leclerc of Ferrari and Daniel Ricciardo, of McLaren. Carlos Sainz was eighth for Ferrari.