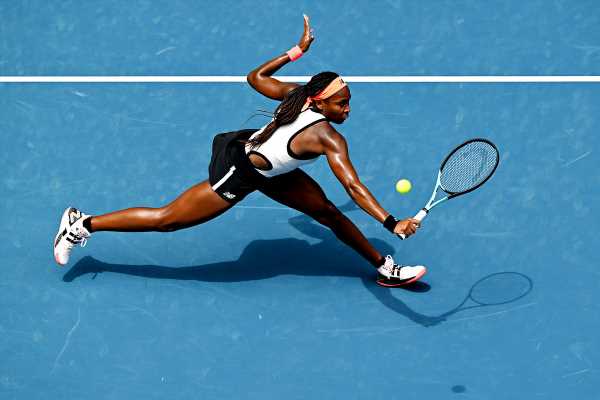 Images from Day 1 of the 2023 Australian Open at Melbourne Park on Monday. In-form Americans Jessica Pegula and Coco Gauff wasted little time in racing into the second round of the Australian Open on the opening day, briskly swatting aside their opponents in bright sunshine on Monday.

Pegula, seeded third behind Iga Swiatek and Ons Jabeur, hit her stride early in the new season by helping the United States win the inaugural United Cup and took less than an hour to see off Jaqueline Cristian 6-0, 6-1.

The 28-year-old simply overpowered her Romanian opponent and there were loud cheers from the Margaret Court Arena crowd when Cristian held serve in the second set to avoid the dreaded ‘double bagel’.

“It definitely gives me a lot of confidence winning matches like that, knowing I’m playing really focused every single point and not letting any kind of points or games go to waste,” said Pegula.

“Definitely first matches are always really tough, especially at a slam, there’s so much hype and anxious nerves leading up. So I’m glad it just went very smooth.”

Danielle Collins, runner up to Ash Barty at Melbourne Park last year, had an injury timeout for a knee issue before grinding out a 7-5, 5-7, 6-4 win over Anna Kalinskaya.

“Any time you’re on the court playing three-hour matches, you especially want to win, so I just needed to push through the hurdle a little bit,” the 13th seeded American said.

“Definitely had a scare there with the injury in the first set but I was able to work through it. I’m just counting my lucky stars there a bit, it really was not a good start for me.”

Amanda Anisimova was unable to continue the good start for American women at the first Grand Slam since Serena Williams hung up her racket, the 28th seed tumbling out 6-3, 6-4 at the hands of Ukrainian Marta Kostyuk. With Barty and Williams both retired, and twice champion Naomi Osaka pregnant with her first child, Melbourne Park will almost certainly crown a first-time women’s champion this year.

There were convincing early wins on Monday for two former US Open champions who have been unable to build on their Grand Slam success.

Briton Raducanu, now 20, will next face teenager Gauff, who came into the year’s first Grand Slam on the back of a title win in Auckland and confirmed her good form with a 6-1, 6-4 win over Katerina Siniakova on Rod Laver Arena. Top seeds Swiatek and Rafael Nadal open their campaigns in the evening session at Melbourne Park.