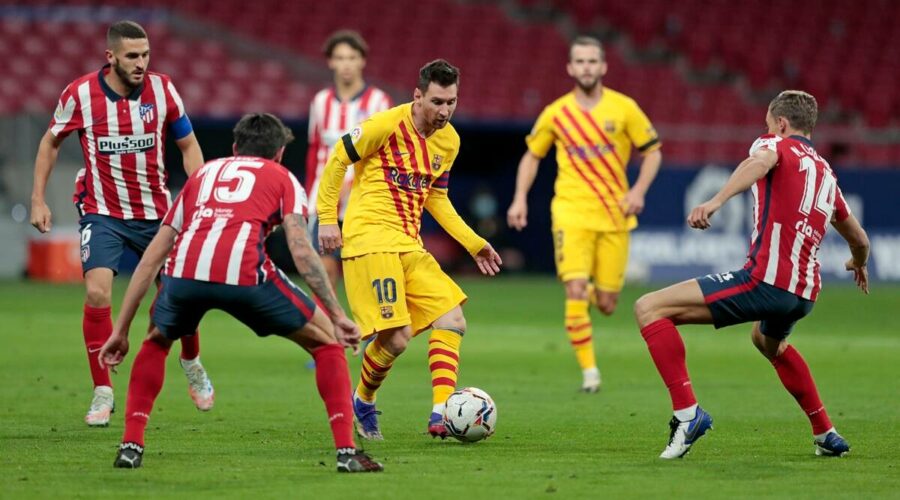 With 10 matches left this season, Atletico Madrid sit on top of the table with 66 points. Barcelona, who are second with 62 points, will have the chance to capitalise on any slip-up on Monday. So often over the years Barcelona and Real Madrid have fought it out between themselves for the Liga title, cruising to 95-plus points while everyone else battles to be the best of the rest.

However, with 10 games to go this season, Atletico Madrid sit top of the table in what looks like a year when 85 points might be enough to secure the silverware.

It is set to be the closest-run title race for some time, with just six points separating first from third, and all three sides harbouring aspirations of glory.

Atletico travel to fourth-placed Sevilla on Sunday in what is, on paper, one of their toughest remaining games.

“Everyone knows that leagues are won in this part of the season,” Atletico captain Koke said.

“We can’t think about if we’re favourites or not, but people will maybe say it for the points situation. Barca and Madrid are two of the best sides in the world and they’ll fight until the end for it like we will.

“If we don’t win La Liga it would hurt us all. We’ve put so much into this season, we had COVID absentees, injuries, and maybe that’s hurting us a bit now.”

Barca, who sit four points behind Atleti in second, will have the chance to capitalise on any slip-up on Monday when they host Real Valladolid.

Ronald Koeman’s side are the form team in Spain, having not lost in La Liga since December and winning 15 of their 18 games since.

Third-placed Real, six points off the pace, host Eibar, who sit in the relegation zone, on Saturday ahead of next week’s Champions League quarter-final first leg against Liverpool.