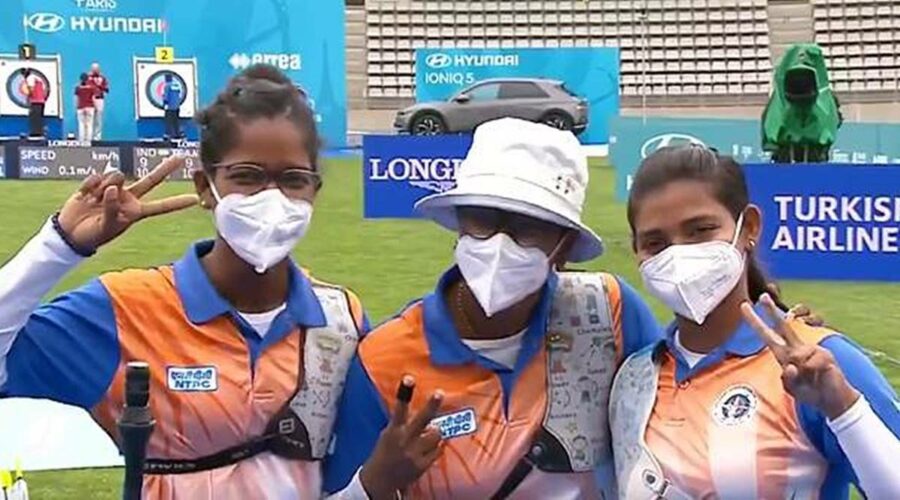 The Indian women's recurve team claimed a 5-1 triumph to give India its second gold medal in the Stage 3 event. The Indian women’s recurve team of Deepika Kumari, Ankita Bhakat and Komalika Bari notched up the gold medal with a comfortable win over Mexico in the World Cup Stage 3 on Sunday, shrugging off the disappointment of missing Olympic qualification last week.

In a repeat of the World Cup first stage final, the troika of world number three Deepika, Ankita and Komalika, who failed to qualify for Tokyo following a shock loss to minnows Colombia, defeated fancied Mexico 5-1 without dropping a set.

This was their second successive gold medal in the World Cup this year, and sixth overall (Shanghai-2011, Medellin-2013, Wroclaw-2013, Wroclaw-2014, Guatemala City-2o21). Deepika was a constant each time.

The trio, which had stuttered to win the gold against the same opponents in Guatemala City two months back, was at its best, shooting four 10s with one X (closest to the centre) for a 57-57 score in the first set.

The Indians’ flawless shooting put pressure back on the Mexican team of London 2012 silver-medallist Aida Roman, Alejandra Valencia and Ana Vazquez. They shot a poor 52 to lose the second set by three points.

Leading 3-1, the Indians had another round of consistent shooting with a 55 but the Mexicans failed to equalise and lost the third set by a slender one point to suffer a second successive defeat this year.

Earlier on Saturday, India won a gold medal through Abhishek Verma in the compound individual event.