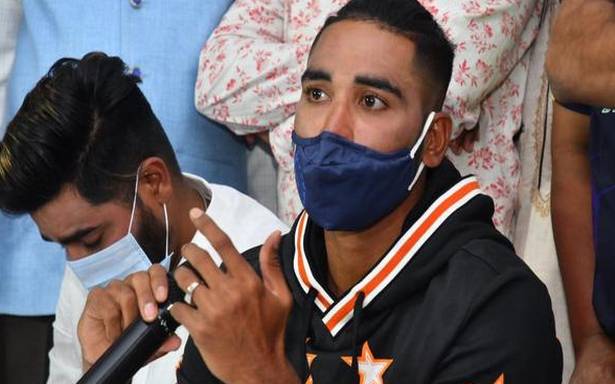 Pays respects at his father’s grave first thing on arrival

For Mohd. Siraj, who played a significant role in India’s historic Test series win in Australia, it was an emotional homecoming on Thursday.

He drove straight to the burial ground to pay his respects to his father Mohammed Ghaus, who passed away before the series began Down Under.

“Yes, I badly missed him today. It was the most difficult time for me, to be there at his grave. I never thought I would have to go through something like this,” Siraj said.

“When I met my mom on reaching home today (first time since his father’s death), she was continuously weeping. Those were truly emotional moments,” he said.

“I thank the entire Indian team and the support staff for the wonderful support they extended,” Siraj said.

Reflecting on the series, the 26-year-old pacer said he had never expected to get the chance to play a Test. “But, once I got the opportunity I approached it like one of those India-A games, so as not to invite any pressure,” he said.

“It was a different kind of challenge to play for India and I enjoyed it. Every teammate said ‘you have it in you to make it big. Just stay focused and give your best’,” Siraj said.

“Frankly, the thought that I was the most experienced bowler (with three Tests) never occurred to me.

“We were all determined to give our best and glad to have contributed to the team’s win,” said Siraj.

Reflecting on the captaincy styles of Ajinkya Rahane and Virat Kohli, Siraj said both were very good, with the same objective — see India win.

“All the youngsters were encouraged a lot and made to believe in themselves.

“Even when we were not good in certain spells, Ajinkya always trusted the youngsters.

“Never had a harsh word. Kept on encouraging us,” Siraj said.

“I should look at the performances in Australia as a benchmark, not relax, and try to keep improving,” he said.

“I am still a boy learning the art of bowling, there is room for a lot of improvement. I’ll play my heart out whenever I get the chance to represent India, which was my father’s biggest room,” Siraj said.

He signed off confirming the news that he was engaged, but refused to divulge any details.