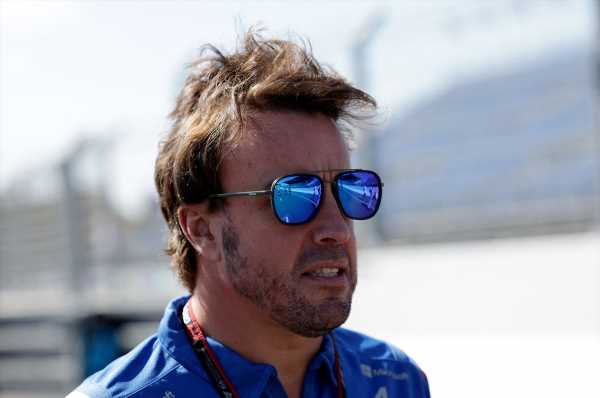 Fernando Alonso apologised on Thursday for calling Lewis Hamilton an idiot after they collided at last weekend’s Belgian Grand Prix and said his heat of the moment comments were blown out of proportion.

The double world champion had also said on team radio, in a broadside heard by a global television audience, that the Mercedes driver only knew how to start and drive in first place.

Hamilton, a seven time world champion, is Formula One’s most successful driver of all time with 103 wins — some of his more spectacular ones coming after he fought back through the field.

Talking to reporters ahead of this weekend’s Dutch Grand Prix at Zandvoort, Alpine’s Alonso recognised his first lap outburst had made huge waves.

“First of all it’s Lewis, he’s a champion, he’s a legend of our time. And then when you say something, and I’m sorry to repeat this, against a British driver there is a huge media involvement after that,” he added.

“They’ve been saying a lot of things to Checo (Red Bull’s Sergio Perez), to (Ferrari’s) Carlos (Sainz), to me. They say something to a Latin driver, everything is a little bit more fun.”

“When you say something to others, it’s a little bit more serious. But anyway, yes I apologise. I was not thinking what I said.”

Alonso said he had huge respect for Hamilton, who was his rookie team mate at McLaren in a stormy 2007 season, and had no problems with him.

“It is something that you say with the heat of the moment, but nothing that I said is true. There are facts that are completely the opposite,” he added.

Alonso said he intended to apologise in person and compared his comments to something said to a team mate during a soccer match after a hard tackle.

The 41-year-old suggested he would be more guarded in future.

“I will try to be quiet always in the radio and don’t be part of a show that I don’t agree (with),” he said.

“All the things that are broadcast on the radio normally are a little bit spicy because the sport wants that spice into the race… I understand that.

“Unfortunately the measure you will have to take to avoid broadcasting things in the heat of the moment is to stay quiet all of the time.”

Mick Schumacher shuts down speculation about his F1 future Mick Schumacher shut out speculation about his Formula One future on Thursday as his friend Esteban Ocon continued to push for the German to join him at Renault-owned Alpine as replacement for Fernando Alonso.

Schumacher, son of seven-time world champion Michael, is out of contract with the Ferrari-powered Haas team at the end of the season when he could also leave the Ferrari Driver Academy (FDA).

“What is being discussed behind the scenes between us is something I’d rather keep between us,” the German said at the Dutch Grand Prix in Zandvoort when asked about his future at Haas and FDA.

“That’s contractual matters which I can’t go into detail with,” he added.

The Formula One rumour mill has gone into overdrive since Spain’s double world champion Alonso announced a month ago that he would be leaving Alpine for Aston Martin at the end of the year.

Alpine announced reserve driver Oscar Piastri as his replacement but the Australian said he would not be racing for them.

McLaren — linked to Piastri — have meanwhile announced a split with Australian Daniel Ricciardo, who joined them from Renault, at the end of 2022.

The game of ‘who goes where?’ has shifted week by week, with the latest rumours linking AlphaTauri’s French driver Pierre Gasly with the Alpine seat in what would be an all-French lineup.

Gasly has a contract with his Red Bull-owned team for 2023, however.

Schumacher and Ricciardo could also be contenders, unless Alpine win a contract dispute and can somehow convince Piastri to change his mind.

Ricciardo has been linked to Haas too, although that team have close ties with Ferrari who may also be keen to put their reserve Antonio Giovinazzi into it.

“The team will take the right decisions,” Ocon told reporters ahead of the Dutch Grand Prix, adding that Alpine knew his preference.

“People know that my choice if I had anything to say would be Mick, if he doesn’t have anything lined up for next year.

“He’s a good friend of mine first of all. If I can help on that, that’s no problem. I think he has shown talents in the junior categories as well, he’s been very fast.

“Sometimes in Formula One it’s not easy to perform with a car that’s a bit on the back foot. I had that when I started in F1. He’s a great guy and he could perform very well if he had a competitive car and at the moment the Alpine is competitive.”

Alpine are currently fourth in the 10 team championship.