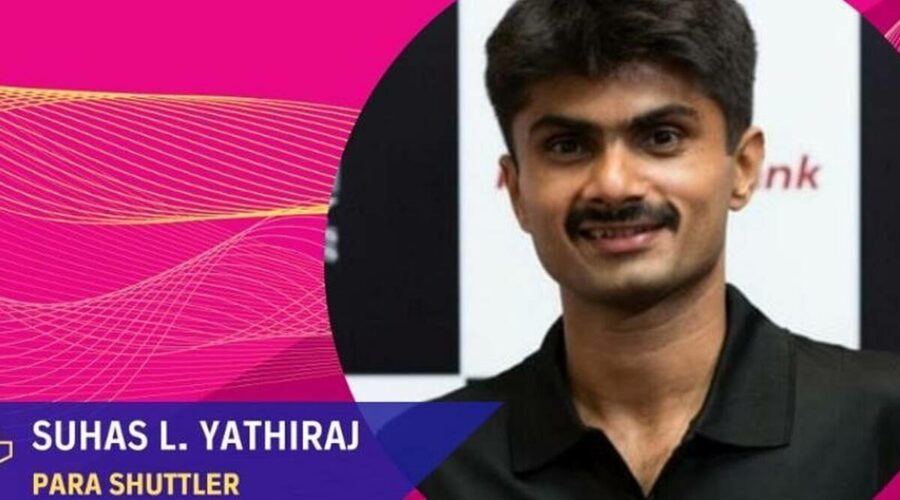 A 2007 batch IAS officer and Noida's District Magistrate, Yathiraj, since early 2020 has been at the forefront of the battle against the Covid-19 pandemic. At the start of this year while most Olympians and Paralympians were battling the uncertainty clouding the Tokyo Games, Suhas Yathiraj, a badminton player in the SL4 category, was fighting a battle of his own. A 2007 batch IAS officer and Noida’s District Magistrate, Yathiraj, since early 2020 has been at the forefront of the battle against the Covid-19 pandemic. Pleas for oxygen cylinders, calls begging for hospital beds, SOS for medicines, asking help for arranging funerals – Yathiraj’s phone was always busy.

Now, in a dramatic turn of events, Yathiraj is again in the spotlight. He is just a match away from winning a gold medal in the category for athletes with lower limb impairment. Wife Ritu Suhas, Ghaziabad ADM, recalls those taxing days.

“There were so many deaths because of Covid. It was a full-time job admitting people, getting them oxygen and attempting to assure them that things would get better. He was trying to build a feel-good factor because as part of the administration, reassuring people was also something that needed to be done. He was doing whatever was possible to help out as many people as he could,” Ritu told The Indian Express.

Yathiraj, 38, picked up badminton in all seriousness in 2016, after national Paralympic coach Gaurav Khanna saw him play at a function and made a remark that he should pick the sport up. At that point, he was posted as Azamgarh DM. He began to practice but the facilities were far from ideal. “There are very few places in UP where you can get good infrastructure for badminton. Maybe in western UP, but not in Azamgarh,” said Ritu.

With limited court options and very few training partners or qualified coaches around, it was an uphill task. However, Yathiraj had for company a band of boys who were ever-willing sparring partners. With him getting busy with work from early morning, the badminton session was generally scheduled for late night. Despite this unusual schedule, the boys would be eager to take on the DM on the badminton court.

“How many people do you know who would get a call at 8 or 9 in the night to come practice till 12? They would do stretching exercises, warm ups and then practice with him. I can recall an incident when it was Diwali in 2016. The whole of India was lighting crackers and at the time my husband called the boys to practice with him and even though it was a holiday, they all came to practice,” said Ritu.

After his transfer to Noida, Yathiraj started to practice out of a stadium in Sector 29 of Noida. He eventually switched to the Pullela Gopichand academy that is based out of Greater Noida. Today, Yathiraj is the World No 3 in his category, has won multiple tournaments across the globe and is one match away from a memorable gold.

His Paralympics campaign started in Group A where he won two games in less than 20 minutes and lost his third group game to Lucas Mazur.

Despite the loss, both him and Mazur progressed to the knockout stages where Yathiraj went up against Indonesia’s Fredy Setiawan. The Indonesian was beaten 21-9, 21-15 in 31 minutes and Yathiraj booked himself a spot in the final with the chance to avenge his group stage loss to Mazur.

Mazur himself had a tough semi-final match, having faced India’s Tarun Dhillon. Their semi-final went into three sets, with the Frenchman coming out on top 21-16, 16-21, 21-18.

The final takes place on Sunday at the Yoyogi National Gymnasium in Tokyo.

09/05/2021 Sport Comments Off on After Covid fight, battle for gold: Noida DM and para shuttler Suhas Yathiraj just one win away away from reaching the top of podium
India