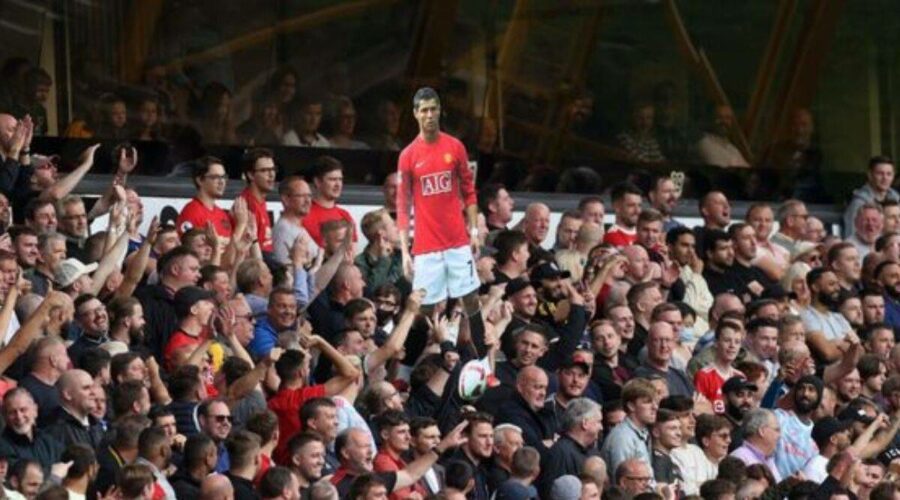 Cristiano Ronaldo has been the talk of the town since his stunning transfer from Juventus was completed last week. The public relations push has been relentless at Manchester United these past few days, detailing everything about Cristiano Ronaldo from his movements in training, his greatest goals, his reclaiming of the “iconic” No. 7 jersey, to the inside story of his goal celebration.

Ronaldo, of course, was immediately added to the giant mural emblazoned outside Old Trafford. United jerseys with his name on the back are flying off the shelves in the club’s megastore.

“Cristiano is in the house,” United midfielder Bruno Fernandes said.

As if anyone wasn’t aware.

One of the best players in the history of soccer is making an emotional return for a second spell at one of the world’s biggest teams, so it’s understandable that Ronaldo has been the talk of the town since his stunning transfer from Juventus was completed last week.

His first appearance back at United is likely to be against Newcastle on Saturday and it is one of the most anticipated occasions in the history of the Premier League, even if the match will not be televised live in Britain because of previously agreed broadcasting arrangements.

But away from all the glitz, the hype and the marketing, what can the soccer world expect of the 36-year-old Ronaldo in what could be the last big move of his club career? Does his presence virtually ensure United will be “closer to winning” trophies, as Fernandes has said.

Certainly, Ronaldo is a still a guarantee of goals. He has a staggering 785 goals in 1,075 appearances for club and country, after all. He has just become the record scorer of all time in men’s international soccer, with 111 goals, and is coming off a European Championship where he won the Golden Boot with five goals in four games.

However, even if he was top scorer in Serie A last season and had 101 goals and 22 assists in a total of 134 appearances for Juventus, his three years in Turin should perhaps act as a warning for United.

That maybe was not all his doing — it was a turbulent period for Juve, which had three coaches in Massimiliano Allegri, Maurizio Sarri and Andrea Pirlo, all of whom had different approaches — yet his presence did wind up being divisive purely for the fact it meant the team seemed to exist as a function to get the best out of him as opposed to working as a unit.

More than 28% shots taken by Juventus last season came from Ronaldo. Juventus was the team that supplied the most crosses in Serie A, serving arguably the best header of the ball in the world whose best work increasingly came in the six-yard box. He had 168 shots in total, 31 more than any Premier League player had.

“If there’s Ronaldo, you need to have a squad that suits Ronaldo,” Sarri, who was Juventus coach in the 2019-20 season, said recently.

Sarri, who is now coach at Lazio, spoke of the difficulty of managing Ronaldo because he is a “multinational brand who has personal interests that have to be coupled with those of the team.”

“But there are also many positive aspects,” he said, “because Ronaldo brings the numbers at the end of the year.”

And that’s the balance United will have to strike.

Does Ole Gunnar Solskjaer turn his team into one whose main function is to supply Ronaldo, and is that a wise strategy?

If Ronaldo starts as a lone striker, does United have the wingers who can deliver a regular supply of crosses that he lives off? In Marcus Rashford and Mason Greenwood, who — when fit — might be first choice, that could be a no, given they are inverted wingers who like to cut inside and shoot. Jadon Sancho, signed this offseason from Borussia Dortmund, could potentially be more valuable due to his ability to stretch defenses out wide and send in more dangerous crosses.

Solskjaer has said he sees Ronaldo as “more of a center forward for me at the moment.”

“I want him in the box, scoring goals,” he said.

If Ronaldo starts as a left winger, which appeared to be his preference at Juventus, does his work rate off the ball come into question and hinder United? And what does that mean for Rashford, who mostly played there in recent seasons?

Ronaldo’s scoring ability is not in question as he begins life back in Manchester.

It’s how he affects the rest of the team that is the most intriguing aspect of his return to United.

09/09/2021 Sport Comments Off on After all the hype, Cristiano Ronaldo set for 1st game back at Manchester United
India