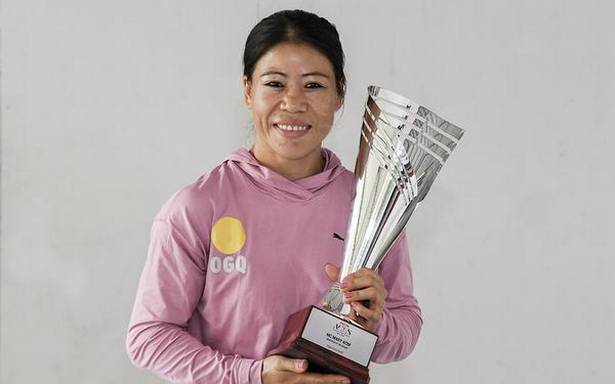 “I am so happy, and I wish to achieve more in the upcoming tournaments. This is a big, big motivation for me,” said Mary Kom. “This award is huge. I have been fighting for so long, almost 20 years. Being a woman, a girl, a mother — is not an easy task. Fight like a woman, that is my biggest message to all.”

Abhinav Bindra, the only Indian to win an individual Olympic gold medal, was conferred the Inspirational Giant of Indian Sport honour. “I’m extremely humbled to receive this award. My gratitude to the jury, to Sportstar and the entire Hindu Group for deeming me worthy of an honour such as this,” Bindra said.

K. Srikanth… a special one.

“I used to read the [Sportstar] magazine [in 2005-06] because it used to cover a lot of sports news,” said Srikanth. “I always dreamt of being there one day and today, to receive this award, from Sportstar is a very big achievement. I’m really happy and honoured to receive it.”

“I must say that Sportstar has been very, very encouraging and supportive of not only me but all athletes. The World Championship win in 2019 was one of the biggest moments of my career… it was my first World Championship gold medal,” Sindhu said.

Recalling his World Rapid triumph in 2017, Anand said: “I am very proud to have won the Moment of the Decade award. I remember that day as if it were yesterday. I remember coming out, and maybe for the second time in my career, actually pumping fist. It was a very special moment for me because it had not been a great month till that point.”

National badminton coach P. Gopi Chand, who bagged the Coach of the Decade Trophy, said: “I remember receiving this award in 2001 as a Sportsperson of the Year, and 20 years later to get this award from Sportstar is really phenomenal.”