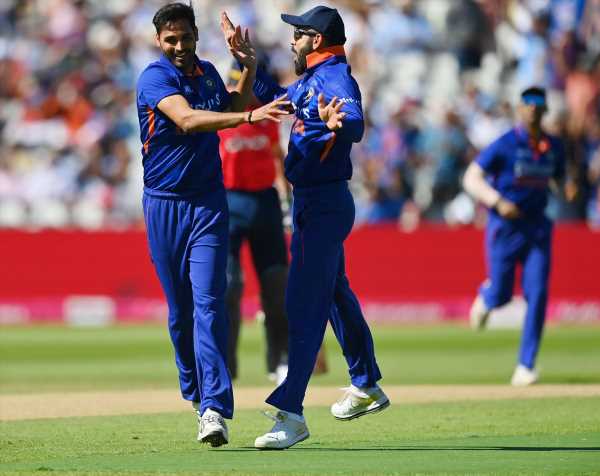 Indian seamer Bhuvneshwar Kumar struck three times as a spirited bowling display from the touring side helped them outclass England by 49 runs in the second Twenty20 at Edgbaston on Saturday to take an unassailable 2-0 lead in the series.

Bhuvneshwar (3-15) rocked England early in their pursuit of 171, removing Jason Roy with the first ball and then his fellow opener and England captain Jos Buttler, before Yuzvendra Chahal (2-10) chipped in with two wickets to leave the home side struggling on 55-5.

Moeen Ali (35) and David Willey (33) kept England afloat with entertaining cameos but a flurry of wickets meant that they were bowled out for 121 in 17 overs. Earlier, India’s bold new approach to T20 cricket was on show again after they were put in to bat as Rohit Sharma and Rishabh Pant got stuck into the England attack from the outset, accumulating 61 runs in the powerplay.

But that early momentum was halted by paceman Richard Gleeson (3-15), who revelled in a dream debut by claiming the prized scalps of Rohit (31), Virat Kohli (1) and Pant (26) in the space of four balls.

Suryakumar Yadav (15) and Hardik Pandya (12) also departed early, both falling to Chris Jordan (4-27), as England mounted a strong recovery before a 29-ball 46 from Ravindra Jadeja helped India finish on an imposing 170-8.

The teams play one more game at Trent Bridge on Sunday.