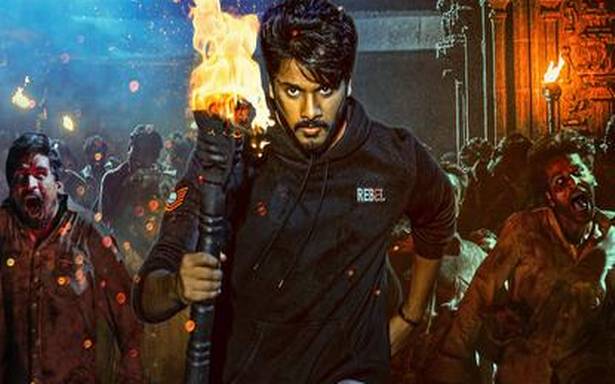 Deep in the Rayalaseema hinterland, where faction rivalry dictates the fault lines, bite-thirsty zombies threaten to destroy everyone in their wake. Amid all the mayhem, one woman is on the verge of breaking free from her self-imposed exile after years. Ever since she was deserted as a bride, she has isolated herself, still decked in wedding finery. Another character comments that the three months of lockdown in 2020 turned many of us nuts, so, understandably, the woman’s behaviour isn’t ‘normal’ after years of lockdown! Zombie Reddy

In one stroke, director Prasanth Varma juxtaposes different worlds — a pandemic looming large, zombies, Rayalaseema faction rivalry — to hilarious effect. Zombie Reddy is a satirical potpourri replete with pop culture references at every turn. It builds up rather slowly but rises to a crescendo of madness, offering laughter and scope for a franchise. The film unfolds like a game and also turns to the higher powers of faith when things spiral out of control. ‘Mrutyunjay’ potion could well be a metaphor for the much-needed vaccine during the pandemic.

The first few minutes encapsulate the many moods of the lockdown, be it the paranoia if anyone in the vicinity coughs or sneezes, cooking videos, lighting lamps and singing ‘go Corona go’ or trying to defy lockdown restrictions only to face the wrath of cops.

At the fag end of the lockdown, friends and game developers Mario (Teja Sajja), Maggie (Daksha Nagarkar) and Bhadram (Kireeti) travel to Rayalaseema because their friend and co-worker (Hemanth) is getting married.

In these on-screen villages around Kurnool, no one wears masks or uses sanitisers. Because there are enough non-viral reasons to lose a limb or life. The entry into the faction region is treated like a game, and as the narrative unfolds, the game moves to the next level with the central characters trying to find an escape route as the threat rises.

Memories of Telugu cinema of the 90s are invoked through the rivalry between Bhooma Reddy (Vinay Varma) and Veera Reddy. In minutes, characters reminiscent of the Peddarayudu and Samarasimha Reddy era take over the screen. Someone is one-eyed, another has lost both his arms, yet another character is paralysed but is still seething with venom. And family feuds trickle down to the next generation. Prasanth harnesses the many tropes of the Rayalaseema-centric films, including the thigh-slapping gesture and the ‘seema bidda’ pride.

Despite all these spoofs, the narrative takes time to find its rhythm. The film truly finds its feet when four characters find themselves in a house surrounded by zombies. The home invasion mode and the subsequent escape leads to further exploring the web of Rayalaseema rivalry and re-uniting of warring families.

Anandi as Nandini Reddy is a welcome addition to the mayhem, as she’s torn between family pride, revenge and newfound friends. Teja Sajja gets ample scope to showcase his potential and Daksha is effective as a gaming addict. Kireeti invokes a few laughs as the always-paranoid-of-diseases friend. The casting of the many Reddys in the Rayalaseema region also works.

The zombie genre is new to Telugu cinema and Prasanth skilfully weaves it into a region-specific story without making it look out of place. And he gets good support from his production design team, cinematographer Anith and music composer Mark K Robin.