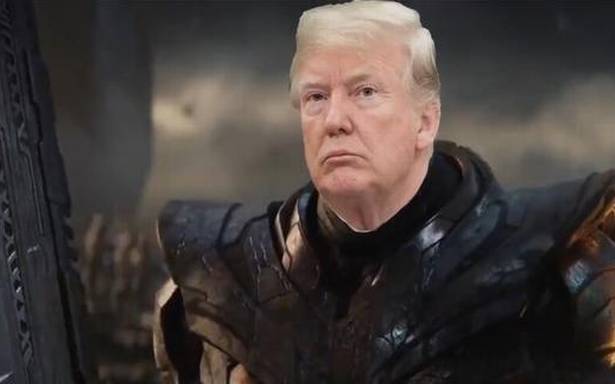 As John Handem Piette sat in his home in Brooklyn, New York, watching the news avidly as the voting counts for the US Presidential election rolled in, the country had its eye on the state of Georgia which looked like it was going to flip. This moment sparked hope and motivation in the filmmaker who was deeply proud of Georgia’s Democratic candidate Stacey Abrams, rifled through movie scenes that had an impact on him.

But when he came across the tear-jerking lead-up scene to the final battle in Avengers: Endgame, he knew he had landed on something special.

“That’s a very powerful scene,” he recalls over a video call from his home, “because it was the culmination of 10 years worth of storytelling on the part of Marvel, that’s why it had so much emotional resonance. Even in Infinity War, when Thanos simply snaps his fingers and half the heroes vanish, that was something you don’t see often in superhero films.”

He draws a parallel with the 2016 election where Trump won, where many Americans felt “defeated”. In Endgame there is a moment where everyone returns and, “the moral arc of the universe bends towards justice. When I watched it, the theatre erupted into cheer because it was such a galvanising moment for many people’s consciousness.”

Not wanting to waste any time, John pulled an eye-catching edit together on his laptop using Adobe Photoshop and Premiere, foregoing After Effects to not want the video to take another day’s worth of work. The two-minute-twenty-second video, appropriately titled America: Endgame, was uploaded to Twitter and Facebook on November 6 and collectively rounded up close to 40 million views, having earned praise from Jennifer Aniston, Mark Ruffalo, Steve Levitan, and more. America: Endgame, at its core, is cheeky and light-hearted, as John fully intended it to be.

John admits that US President Donald Trump “naturally fits the personality and energy of Thanos” but adds that, like Thanos, Trump does not think he is “evil”. However, he acknowledges that both Republicans and Democrats have people who “fight the good fight”. While it was a given that Trump is Thanos, Biden is a battle-weary Captain America, and Kamala Harris as The Falcon in this specific video, it was the casting of the rest of the Avengers that had people all over the world reacting.

A screenshot from ‘America: Endgame’ featuring US Vice President-elect Kamala Harris as The Falcon

In the edit, Black Panther is portrayed by former US President Barack Obama while Keisha Lance Bottoms and Stacey Abrams played Shuri and Okoye. Georgia, for John, is a Wakanda. John gushes over the inspiration of Abrams in particular, “Because of her Herculean effort, she is a national treasure; she’s brilliant, cunning and empathetic. And Atlanta mayor Keisha Lance Bottoms became a real star during the Black Lives Matter protests earlier this year. Some leaders really emerged in our country, especially against voter suppression laws.”

There were some castings that earned many a double take, primarily that of late actor Sean Connery as Rocket Raccoon. A James Bond fan, John laughs when this is brought up, adding, “I do believe he was very vocal in politics in the UK, particularly in Scotland. But I also did want to cut through the earnestness by featuring him.” Elon Musk as Iron Man earned a few laughs but John states, “Musk is an interesting figure whose behaviour we may not always agree with, but he was vocal about climate change and the power of technology for the future, as was Tony Stark.” And, of course, Greta Thunberg as Pepper Potts, had green netizens quite excited. Given there were many social media back-and-forths between Greta and Trump, so John saw this exactly fitting.

There are figures in politics and popular culture who did not make it to the edit, and John is well aware. He shakes his head and smiles as he recalls some feedback he received on social media. “Some people have asked for Dr Fauci, especially during this pandemic time,” he puts forth.

As a writer and filmmaker, John also commends comedians such as Bill Maher, Stephen Colbert and Dave Chappelle for keeping Americans informed of the good in the country. “They poked and prodded at Trump in ways that kept onlookers sane,” he asserts. Though we may not see them in America: Endgame, they were an important part of assembling — pun intended — this project.

John learned how powerful memes can be, not just for their relatability factor but also the remarkable way in which they are markers of history, and they have an ability to start serious conversations catalysed by humour. “I understand the emotional appeal of America: Endgame but I hope people don’t take it too seriously! At the end of the day, it was a really fun and uplifting project, and it may spur more such videos from me in the near future!”

Safe to say, we can look forward to a sequel of sorts.

11/17/2020 Lifestyle Comments Off on When Trump became Thanos: meet the filmmaker behind ‘America: Endgame’
TV & Movies