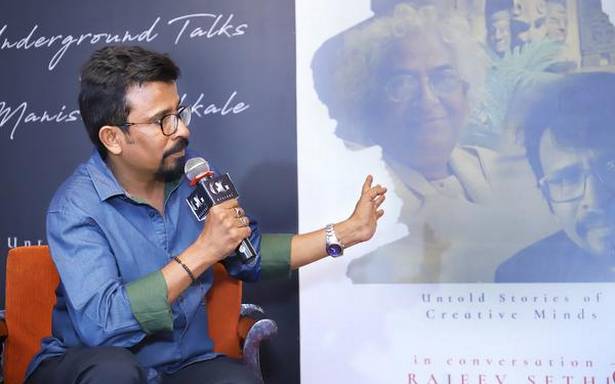 One of Delhi’s oldest galleries reopened earlier this year. Once the baby of collector and gallerist Kuljeet Singh Bhutalia, Gita Art Gallery, is now abbreviated into ‘GAG Moderne’ and being spearheaded by three young artists, Neha Talwar, Anirudh Tripathi, and Gopal Mehan.

In March, the trio made a mark of the gallery’s return, with a group show by 10 of the most important names in Indian contemporary painting. This included Rameshwar Broota, Amitava Das, Manu Parekh, and Mona Rai.

Manish Pushkale, a 46-year-old painter and trained geologist who was also a part of this show, is now collaborating with the gallery for a monthly series of discussions, called Underground Talks with Manish Pushkale. The aim is to have the private gallery space engage with the creative community at all times, and not just centre its relevance to the art business from show-to-show.

“Talks like this usually happen only during fests, or when they are pegged to a single exhibit,” Pushkale says. “Lately, the capacity to listen has shrunk alarmingly. We are all talking at each other and not to each other. We want to have people listen again,” he says.

Two such talks have already taken place. The first was with Hindi poet and cultural critic Ashok Vajpeyi; it was followed by a session with noted scenographer and designer Rajeev Sethi.

Next in the series will be Ramashankar Singh, a politician from Madhya Pradesh, who was in 1996, appointed the chairman of the Indira Gandhi Rashtriya Manav Sangrahalaya in Bhopal. Singh currently runs the ITM group of educational institutions in Bhopal and Gwalior.

Ironically, the courses offered in these institutions span only the sciences, management, and engineering. “But he’s filled the campuses’ corridors with sculptures and paintings. He is, without teaching art, creating an atmosphere of learning art,” says Pushkale.

What made you start this series at GAG Moderne?

A private gallery’s contribution to the art space can be very important and worthwhile. Usually, in such spaces, people only come to buy and sell art . But also, part of art business is to think about how to participate in society, and be more inclusive towards people who are not looking to buy. I think the gallery’s role should be to also groom a new generation of rasikas. That’s why we’ve started a monthly talk-show of sorts, which is open to all and is not ticketed.

What sort of impact do you think this series will have?

Presently, I feel like there is divisions between different art forms. We – musicians, writers, painters, dancers – despite living in the age of information technology, only know of each other a little bit. We aren’t really in the company of each other. We need to be, and we need to think holistically for Indian art, and not in fragments. We want to create those new corridors of togetherness and connect. It is important; it is our responsibility.

Who are the sort of people do you expect to be in conversation with?

I’m a painter myself, but I want to blur these divisions and talk to all sorts of people. Those who think creatively and radically. Be it film makers, politicians, sportspersons, or doctors, the one thing that is common is their concern towards the country, its heritage, and also the ‘self’. My ear is on the ground. For instance, for two talks after the upcoming one, we will have diplomat, politician, and author, Pavan Varma; after him, we’ll speak to psychologist and social-theorist Ashis Nandy.