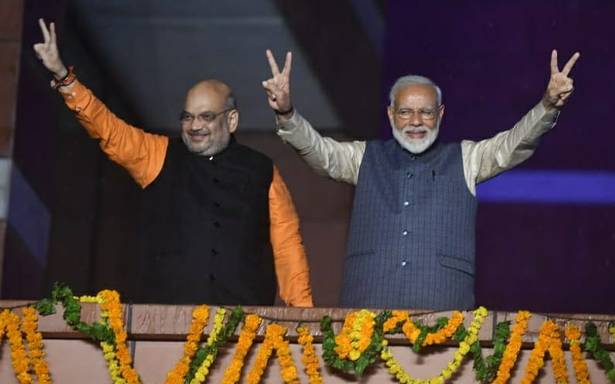 Heading towards a grand finale, the BJP, on Thursday, is poised to return to become the second political party in the Indian history to come back to power, even stronger this time.

The ruling AIADMK in Tamil Nadu seemed to be on course to win a comfortable number of seats from the 22 Assembly segments where bypolls were held, signalling that K. Palaniswami can breathe easy and continue in the saddle for another two years.

The BJD on Thursday looked set to form its government for a fifth straight term negating a Modi wave that is sweeping the country, with its candidates leading in 115 of the State’s 146 seats.

N. Chandrababu Naidu, who has a few records, including being the longest serving Chief Minister in Andhra Pradesh, finds himself at the crossroads as his Telugu Desam Party (TDP) faced a rout in the Assembly as well as Lok Sabha polls, dashing his hopes of emerging kingmaker at the national level.

The ruling BJP in Arunachal Pradesh won seven Assembly seats and is leading in 11 constituencies, election officials said on Thursday. It is also leading in the two Lok sabha seats from the State.

The Opposition Sikkim Krantikari Morcha (SKM) won seven Assembly seats and is leading in four constituencies while the ruling Sikkim Democratic Front won three and is ahead in six, election officials said on May 23. Sikkim has 32 Assembly seats.

By the afternoon on May 23, when it became clear that the National Democratic Alliance (NDA), led by the incumbent Bharatiya Janata Party (BJP) would retain power at the Centre, reactions came in from across party lines and celebrities congratulating PM Narendra Modi and his party.

The leaders of China and Russia were among the earliest to congratulate Narendra Modi on Thursday, the day the results of the 17th Lok Sabha elections were declared.

The issue of political violence is a major factor that played a decisive role in shaping the electoral outcome in the Parliamentary constituencies in North Malabar region as it was the United Democratic Front’s (UDF) key campaign theme in the aftermath of the twin murders of Youth Congress workers Kripesh and Sharath Lal at Kalloytt in Kasaragod in February.

Feel like a batsman who has scored a century while his team has lost: Tharoor

Set for a win from Thiruvananthapuram, Shashi Tharoor took to Twitter to thank his supporters. In a series of tweets on Thursday, Mr. Tharoor dedicated his win to Congress workers, volunteers and the people of Thiruvananthapuram "for reposing faith" in him.