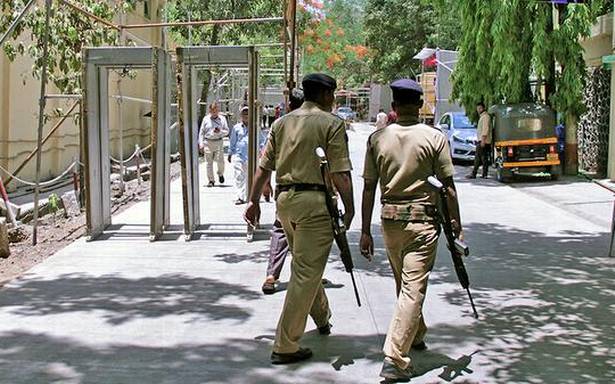 10,000 polling staff to be deployed at the Shiv Chhatrapati Sports Complex

A tight security shield is in place for counting of votes on May 23 for the four Lok Sabha — Baramati, Shirur, Pune and Maval — in Pune district.

The maximum rounds of counting will take place for the Shirur seat (27), followed by Maval (25). Counting for the Pune and Baramati seats will be completed in 21 and 22 rounds respectively.

“This time, we expect a delay of at least a couple of hours in the final declaration of results as the votes recorded by the Electronic Voting Machines (EVMs) will have to be tallied with the voter-verified paper audit trail slips (VVPAT),” said Pune District Collector Naval Kishore Ram. Each round was expected to be completed in 40 minutes, he added.

As many as 10,000 polling staff will be deployed at the Shiv Chhatrapati Sports Complex in Balewadi — where the counting for Maval and Shirur will take place — and at the Food Corporation of India godown in Koregaon Park which will see the counting for Pune and Baramati seats.

“To ensure foolproof security, no one will be permitted inside the counting centres except the polling staff. The candidates and their representatives have already been issued with passes. Rules stipulate that only one representative per candidate is to be allowed at the counting table,” Mr. Ram said.

The 4,000-plus EVMs from Pune and Baramati constituencies seats have been kept at the FCI godown, guarded by more than 100 security personnel, and with 90-plus CCTV cameras as extra support.

District election authorities said that the number of counting tables has been increased in Maval, Kolhapur and Hatkanangale (both in Kolhapur district) constituencies in western Maharashtra in a bid to increase the speed of counting.

The contests on the Baramati, Maval and Shirur seats were keenly fought and the results are expected to be neck and neck.

The prestige of the Pawar clan is at stake on the Baramati and Maval seats.