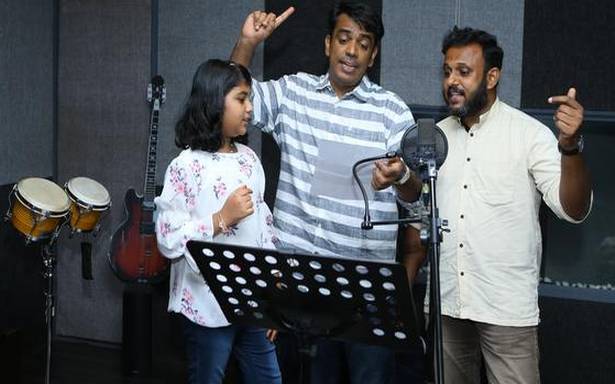 Kochi-based Abdul Khadar Kakkanad has been writing and recording tracks since the late 1990s, and is very much part of the poll fervour this year as well

Abdul Khadar Kakkanad grabs headlines during every election in Kerala, for adding pep to poll campaigns with his parody tracks. Since the late 1990s, Kochi-based Abdul has been writing and recording such songs, irrespective of the colour of the party flag.

These days, the 44-year-old has his task cut out with the elections to the Kerala Legislative Assembly set to be held on April 6. “I have a team of six to eight singers and because of the workload, the recordings are done at studios in Kakkanad, Kalamassery and Thammanam. Even then, I am not able to record more than 20 songs in a day. I have already made over 200 songs for candidates from across the State. I have my hands full now, with the campaigning reaching a crescendo,” says Abdul over phone.

He adds that the writing part is not easy, especially when he has to pen lyrics for the same song for different political parties. “On most occasions, they only give a gist of what they want in the song and I have to come up with the right words. Usually, five songs in the tunes of popular numbers are recorded for the same candidate, but it can go up to 10 in some cases,” he says.

Chartbuster film numbers, non-film numbers, folk songs, Mappilapattu and non-Malayalam songs are generally chosen to be turned into songs for political candidates. “The scene is different this year, because there weren’t many film releases in 2020 due to the lockdown. So we have gone back to the foot-tapping tracks of the 1980s and 1990s,” he says.

Of the handful of songs that came out last year, ‘Kalakkatha’ from Ayyappanum Koshiyum is a favourite with all parties. “I might have recorded at least 30 numbers based on the same tune!” he laughs.

He also makes parody numbers for candidates after poll results are declared. The songs are mostly sponsored for the candidates by party workers, friends and well-wishers; celebrated names in the fray often get such sponsorships. Actor Dharmajan Bolgatty, contesting from Balussery, a new face this year, is one such person.

One of the first songs for which he wrote a political ‘parody’ was ‘Sonare sonare’ from Punjabi House (1998). “It was a song attacking the ruling LDF headed by the late Chief Minister EK Nayanar. Next time, when the UDF came to power, I had to write against them and it was a parody of ‘En karalil thamasikkum’ from Nammal (2002),” he recollects.

In the initial days, he had to make common songs for each political party without specifying the candidate’s name. But as cassettes gave way to CDs, songs were written for specific candidates. The singers in his team are OU Basheer, Ramesh, Jayaraj, CH Fahadh, Karthika Babu, Shabeer Neerungal, Liji Francis and Baby Velga.

“I don’t want to claim any monopoly. There are so many candidates and I make songs for a small percentage of them. During the recent local body polls, I had to say no to many of them because I couldn’t handle the workload,” he says. While there are 957 candidates in the Assembly elections, 75,013 contested in local body polls held last year.

In the age of social media

He adds that the field is wide open, with karaoke tracks available in plenty. One need not depend on studios to bring out a song. All you need is a way with words and a sense of music. In this age of social distancing, the final output is often sent to the client via WhatsApp and not as CDs, he points out. “But one has to be careful with the content. Earlier, these songs were played at processions, public meetings or junctions only. But now they have a wider reach with social media coming into the picture. So we are often at the receiving end of scathing attacks, especially when we make fun of a candidate or a party and that doesn’t go well with the supporters of that party,” he adds.

Once the election fever subsides, Abdul will get back to managing his YouTube channel, Musiland Audios Jukebox, which mostly brings out Mappilappattu numbers.