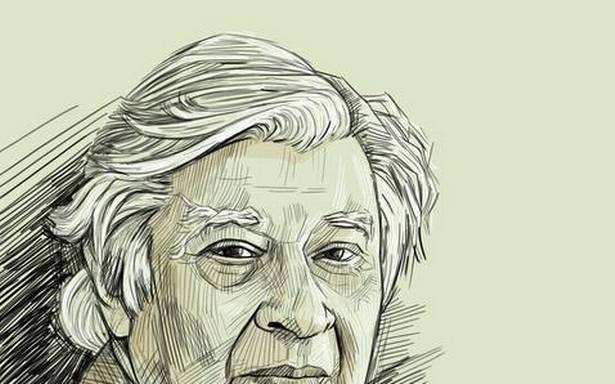 He used figures from Hindu and Christian myths to reflect the turmoil of the 70s: the midnight arrests, censorship of the press; the repression and hostility of state machinery

Artist Krishen Khanna has a new project. He takes out his phone to show me the beautiful sculpture being created in England based on his designs. It’s inspired by a particular famous incident in the Ramayana, which he insists has been portrayed badly by painters and not at all by sculptors.

The sculpture transcends time and space to simultaneously evoke Persian, Welsh and Indian mythology. The fact that I see it on the day before Dussehra isn’t lost on me, nor is the fact that though we celebrate Ram’s defeat of Ravana, a lot of creatures fought him. It was an army of animals, who supposedly had no agency or power, who won the war for Ram.

Khanna points to the painting he’s working on in his drawing room. It’s a black and white rendition of a bandwallah on a cycle. “My son says I should colour it but it’s meant to be the bandwallah going home at night. There’s no need for colour, is there?”

Khanna has an extraordinary body of work that spans pre- and post-Independence India. He first copied the ‘Last Supper’ at the age of seven, which means he’s been an artist for 89 years. “I can’t live without them,” he says, as I ask about the Husains and Padamsees on his walls. When I look at him for clarification, he replies that he can’t live without painting. But painting and his peers among the Progressive Artists’ Group (PAG) are equally compelling for Khanna. He has always been inextricably bound with PAG, a group of artists that included M.F. Husain, F.N. Souza, S.H. Raza, K.H. Ara, Ram Kumar, Bal Chhabda, Akbar Padamsee and Tyeb Mehta.

“Each one of us did very different work. There was no dictate on the types of painting. We were all poets and existed in bonhomie. For example, Husain had an exhibition in Tokyo and he was short of paintings. Chhabda sent him his own collection of Husain’s works. When Husain came back and offered him the money that the paintings had sold for, he refused, saying that he’d given Husain the paintings. “They could have considered me an outsider,” Khanna muses. “A bada sahib. But they were big hearted and honest. Each one was an extraordinary person. Now I’m lonely”.

The reason Khanna, unlike the rest of the Progressives, could be considered a bada sahib was because he was a banker for 12 years before he resigned to become a painter. He came from a family of educators; went to study at the Imperial Service College in Windsor on a scholarship at the age of 13 and came back to Multan four years later because World War II broke out and he was evacuated. His family moved to India in 1947 and by 1948 he secured a job with Grindlays Bank and moved to Bombay where he met the Progressives. He was transferred to Madras and Kanpur by the bank while he continued painting on the side and only took the plunge in 1961 and quit Grindlays. He left the farewell party his bank colleagues threw for him to head straight to a party his artist friends threw in celebration. And from there he flew into a new life, first on a fellowship to the U.S. and then into a small house with his extended family in a resettlement area in Delhi called Bhogal as a full-time artist.

But he, like the rest of the Progressives, was not only creating a new international idiom in painting that contrasted with the more figurative Bengal masters in these heady days. They, especially Khanna and Husain, were also telling stories of the newly independent India as it was buffeted by war, penury, scarcity and migrations. In the early days of their friendship, Husain and Khanna would sketch refugee families at the New Delhi railway station. Bhogal’s wandering population and its proximity to the crowded tombs of Nizamuddin helped Khanna use it as his personal observatory of the changing character of Delhi and to tell stories of displaced refugees and humanity on the streets: the men in dhabhas; exhausted, sleeping people; labourers crowded into the back of trucks; the bandwallahs in their gaudy uniforms that served as reminders of British era princes. He also used figures from Hindu and Christian myths to reflect the turmoil of the 1970’s: the midnight arrests, censorship of the press; the repression and hostility of state machinery. The differing styles of the Progressives can actually be compared by their immensely different treatment of the same biblical allegories. Khanna’s Christ became one of those itinerant pilgrims found around Nizamuddin even now, reflecting resistance against persecution by an oppressive system.

Khanna’s political lens is probably at its clearest in a place so public that no one notices it: the lobby of the ITC Maurya Sheraton hotel in Delhi where he both painted the dome over four years, and was involved in curating a collection of some of the greatest art of India. While the hotel itself was modelled on the ancient Buddhist Chaitya cave temples in Karla, Maharashtra, the heart of the hotel is Khanna’s glowing mural called the ‘Great Procession’ in the lobby. In the artist’s words, it depicts “the great procession that is India and Indian life.” The scenes portrayed are typically Indian, including tea-sellers and old women gossiping. There is even a portrait of Khushwant Singh, an old friend of Khanna’s.

Fusing past and present

Khanna uses the three-tiered curved surface to fuse scenes of the Mauryan past and the present day. As Khanna says, “[it]…uses ordinary daily life incidents to show a continuous journey with no beginning and no end. If you look carefully, you can find yourself in it… One side of the dome isn’t painted, so if you stand there, you are a part of it.” While this is possible at the lobby, it’s far more apparent on the 12th floor where you find yourself equal in dimension to the girl painted on the dome to your right. Another friend, Manjit Bawa would climb up to help Khanna paint parts of the dome. Khanna got paid ₹5 lakh but ultimately only made ₹1 lakh after expenditures.

But Khanna has focussed on his bandwallahs for a while now, whom he says reflect the Indian preoccupation with pomp and relics of the British Raj while at the same time telling the stories of the groups of men who dress up to perform at weddings. Arun Vadehra, who’s known Khanna since the foundation of Vadehra Art Gallery, says Khanna’s preoccupation is with form and colour. “The bandwallahs, like Husain’s horses, are interesting in their blown-up cheeks and thick lines, but we shouldn’t try to see what we want in the work of an artist, especially one of the greats like Khanna. Instead, we should look at the form and colour. But I still believe Khanna is one of the great raconteurs who tells the stories of ordinary men through his brushes”.

Much like the miniature artists I love, Khanna speaks with a few strokes. But the forms and colours he uses are also delightful. His work is like Picasso’s — it has got simpler over time but it is an allegory for an age.

The writer is the author of the fantasy series Weapons of Kalki, and an expert on South Asian art and culture.

11/26/2021 Lifestyle Comments Off on The last of the Progressives, Krishen Khanna told stories of a newly independent India
India