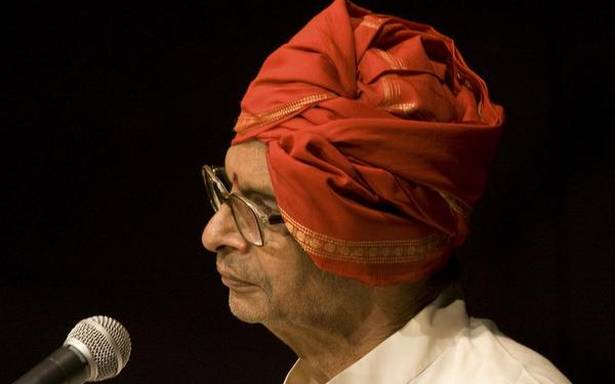 Nebburu Narayana Bhagavataru was not only a great artiste, he was also a man of character. Not once did he use art to make his life better

If Nebburu Narayana Bhagavataru is singing for a talamaddale or a Yakshagana performance, it meant that there was a large number of cultured people in the audience. Needless to say that he was a past master at singing for emotionally rich mythological prasangas like Harishchandra Charite, Lanka Dahana, Rama Neeryana, Bhishma Parva, Seeta Viyoga and such others. In his singing, he could draw into the prasanga, the actor and the audience alike: he was perhaps the only Bhagavataru who could integrate all energies into the prasanga, without drawing any attention to his own self.

The popular meaning for the word Bhagavataru is someone who is the devotee of Hari (Lord), and who is immersed in singing for the Lord. In Yakshagana however, the meaning is not so confined.

Who ever said that the puppeteer only makes the puppets dance and doesn’t dance himself?The puppet comes to life only when the puppeteer is himself at dance, so it is in the case of the Bhagavataru as well. He dances within himself, and the song is its embodiment. When the Lord who had refused to wield the weapon takes to it, “Have you come forward to kill me, a small fry?” asks the character in a Yakshagana prasanga. At this juncture Nebburu breaks into song: “Enage Nageyu Bantu” (I felt like laughing), and it is his rendition that the whole prasanga gains meaning and leaves an impact on the audience.

Today, it is inevitable for us to live in a fast-paced world, but is it also inevitable for the arts? This is a question that bothers me. You can narrate the story fast, but you need a slowness to expound its details. Nebburu was perhaps the last from that bastion, someone who could bring in a richness of detailing. It is common knowledge that the slow pace is typical of Yakshagana practise in Uttara Kannada. However, when I entered this region as an artiste myself, it was not my experience it. It was true only of Nebburu. Just examine this poem that is set to Triputa Taala “Novu Nalivugalinda Koodida Jeevana Kandaytu”. The words No.vu, jee.vanava, Kanda.ytu, used to be rendered by Nebburu without compromising the chandassu, meaning, or laya. That was the excellence he had achieved in his art: vilamba or slow pace is not something that is there to kill time. It is a value and to work on it is no easy achievement. If there’s poise in your life, it will reflect in your art.

Simply because he admired the slow pace, it didn’t mean that he believed there should be some dialogue, some dance and some song.

He had rejected that model gently and firmly believed that pace had something to do with meaning: he introduced a multiple register of meanings with slowness. In performances abroad, and in non-Kannada speaking regions, there are instances of how Nebburu steered the direction of the performance with his commendable Bhagavatike, and actually demonstrating that it is the Bhagavata who eventually directs a performance.

Nebburu was inspired by Kodgipala Ganapathi Hegde’s Bhagavatike and it was this man who directed him to his guru. He did not nurture huge ambitions as a student. But he was always a sincere believer of tradition and the path his seniors treaded. He also learnt playing the harmonium for Yaaji Bhagavataru and Uppuru. When he was not given an opportunity to sing, he stayed up all night listening to senior Bhagavataru, learning and absorbing!

He never saw Yakshagana as a method to earn money. It was a way of life for him. Nebburu never signed contracts nor asked for a particular sum of money. There are several instances of how he has sang the whole night, and returned home with betel leaf and one rupee. He used to travel for weeks, and when his little daughter passed away, he came to know of it only weeks later. So it was with his ailing mother. All that he had was a small piece of land; even with a life full of hardships he never compromised on principles. There is a code of conduct for a farmer, for a bank employee, for a doctor. What is the code of conduct for an artiste? To turn up on time for a performance, to go along with the rest of the group and ensure the success of the programme. Along with this, he also has a social responsibility. With all the troubles and difficulties that he faced in his artistic life, Nebburu never gave up his beliefs as an artiste.

The author is a renowned Chande-Maddale artiste, a Bhagavatha and respected organiser too