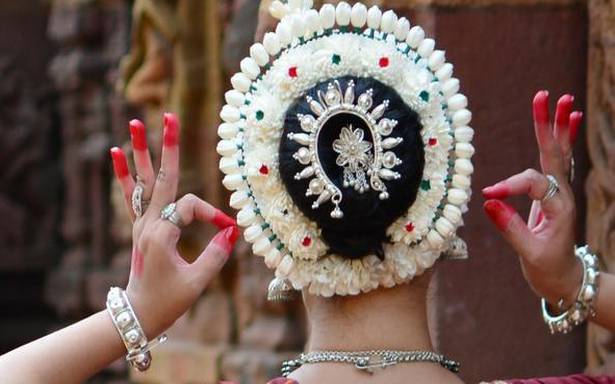 How does one distinguish Odissi from other Indian classical dance forms? Certainly because of its unique hair accessory, known as tahia, that is also the most striking aspect of Lord Jagannath’s annual Rath Yatra, when Jagannath and his two siblings, Subhadra and Balaram, don tahia as their crown.

“It has been an integral part of the temple tradition and later became the most attractive feature of the Odissi costume,” says Rupashree Mohapatra, Puri-based Odissi dancer, known as the lone exponent of the reconstructed Mahari dance style.

“Like the dance form, tahia has also evolved from Mahari, which originated in temples and was performed by hereditary dancers. They used to wear trisikha tahia (designed with three sticks),” she says.

According to dancer and former president of Odisha Sangeet Natak Akademi, Priyambada Mohanty Hejmadi, tahia was a later addition to the Odissi dance costume. “It was not there when I started dancing,” she says.

Odissi exponent Kumkum Mohanty, foremost disciple of Guru Kelucharan Mohapatra and former chief executive of the Odissi Research Centre, agrees. “Tahia replaced flowers as hair decoration initially out of necessity,” she says. “Guruji would himself pluck jasmines and string them together with a coconut stem. Later, the tahia, made of shola pith (Indian cork) flowers, came into use. My guru, who hailed from a traditional painter’s family of the Puri region, was the brain behind it.”

Says Netrananda Moharana, the well-known Puri-based tahia-maker, whose late father Harihar Moharana is known as a pioneer in designing the headgear, “I have heard from my father that the design was finalised by three stalwarts — Guru Pankaj Charan Das, scholar Dhirendranath Patnaik, and Guru Kelucharan Mohapatra — after several rounds of modifications.”

Talking about the process of tahia-making, Moharana says that locally available shola pith reed is used to carve the intricate floral designs. “After the brown cover of the reed is peeled, the white rolls are cut into smaller blocks and shaped into different flowers. They are then strung together with a wire. A long twig, known as chuli, is placed atop the hair bun to signify the spire of the Jagannath temple. It takes two days to make a tahia.”

Shola pith not only lends itself well to creating designs, it has significance for the dance form as the deities at Jagannath temple are also decorated with pith flowers.

“Since it is part of temple tradition, experimentation is not allowed in the craft of tahia-making,” says Moharana.

Sujata Mohapatra, another well-known disciple of Kelucharan Mohapatra, adds, “Tahia is the most sacred element of Odissi attire; the unique identity of this dance tradition. Its sanctity has to be maintained.”

The Bhubaneswar-based journalist writes on culture.