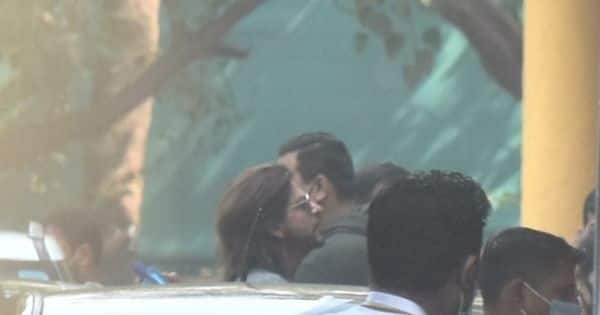 Shah Rukh Khan was snapped at YRF studios today. He was seen sporting long hair. He wasn’t wearing a mask. According to reports, he has kick-started shooting for Pathan. There is no official confirmation yet on the shoot or the film. According to reports, the film is directed by Sidharth Anand and also stars Deepika Padukone and John Abraham in key roles.

A source told Mumbai Mirror earlier, “While the November schedule will be in Mumbai with only SRK, co-stars, Deepika Padukone and John Abraham join him early next year during an overseas stint of the film. It is a battle royale between SRK and John, with Deepika playing an important thread, taking the narrative forward.”

The source added, “After wrapping this film, SRK will start either Rajkumar Hirani or Atlee’s film in August 2021. “While Atlee’s film seems to be in the forefront right now, he has his heart set on Hirani’s social drama, as it will be a breather between two action-packed films. But Hirani takes his time to complete a script and a clear picture will only emerge by mid-2021. The film is currently being scripted by Raju and Kanika Dhillon, they are working on the second half,” shared the source. Speaking about Atlee’s film, the filmmaker will come in Mumbai in the month of December as he is on the verge of locking the script. “Atlee has been developing the script remotely with a team of Karan Johar, who is co-producing the film with SRK. He will be in the city from December for narrations, to lock the cast, scout for locations and get his technical team in place.”

The actor was last seen in Zero alongside Katrina Kaif and Anushka Sharma. The film was a big dud at the box office and fans were disappointed as well. Speaking about his next projects, SRK had said a few months ago, “This time, I didn’t feel like doing it. I thought, this time, I will take out time to watch films and listen to scripts and read books. My kids are also finishing their college life. Suhana is still in college, Aryan will hopefully pass his college in a year. I want to spend more time with my family. I only act when it comes from my heart, but this time I don’t feel like doing it. A lot of people are telling me stories, I’ve heard 15-20 stories, I liked 2-3 of them. But I haven’t decided yet which film to do. Because the moment I take a decision, I will have to start working on films. I will completely be engrossed in it.”