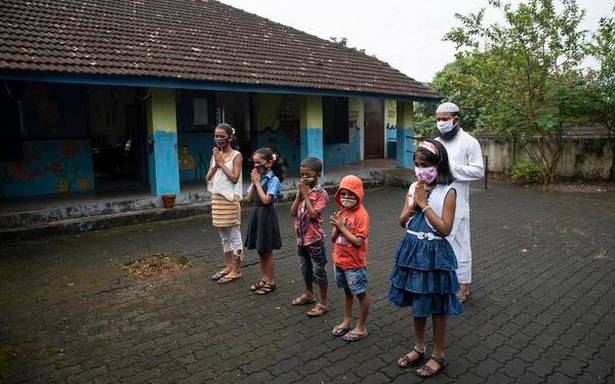 Yawning gap between States in access to online education, says the study.

The percentage of rural children who were not enrolled in school doubled during the pandemic, with Government schools seeing an increase in enrolment at the expense of private schools, according to the Annual Status of Education Report (ASER) 2021. Over a third of children enrolled in Classes 1 and 2 have never attended school in person.

However, enrolment does not necessarily mean that learning took place. In a survey of over 76,000 households with children aged six to 14, ASER found that while 92% of children had textbooks for their grade, only a third had access to any other learning resources or support. With smartphone availability and access limited, online learning was restricted to a quarter of students, though there were major differences in the experience of students from different States. For instance, 91% of students from Kerala and almost 80% from Himachal Pradesh had online education, but only 10% from Bihar and 13% from West Bengal.

Due to the pandemic, ASER’s 16th annual report was based on a phone survey assessing enrolment in schools and tuition classes, and access to devices and learning resources, rather than the organisation’s usual face-to-face survey which assesses learning outcomes and children’s competencies in reading and arithmetic skills.

“Although it is not clear if this is a permanent phenomenon or will be reversed post the pandemic, it is important to ensure that government schools and teachers are equipped and given the necessary resources for this surge in enrolment,” she added.

This is particularly true for Class 1 and 2 students, as 37% of those enrolled in government schools have never even stepped into a physical classroom before. “The habit of going to school, sitting in a classroom, and teaching in a classroom has been disrupted significantly. We need to ask if this disruption can be repaired simply by reopening schools,” said Madhav Chavan, president of Pratham, the educational NGO which is the parent organisation of ASER, emphasising that a “business as usual” approach could not be imposed.

During the pandemic, almost 40% of students took tuition classes, as many parents struggled to provide the learning support students were not receiving from closed schools. Although textbook distribution was a success story in most States, with 92% of students having the texts for their grade level, many students did not receive much else. Just over a third of students enrolled in closed government schools in 2021 received worksheets, phone messages or any other sort of learning activities or materials in the week of the survey.

Smartphone access was a challenge in the delivery of online education. Although availability almost doubled to 68%, only a quarter of children even in homes with smartphones were able to access it whenever needed. In smartphone owning households, 26% of children had no access to the device at all, while 47% had only occasional access. “Going forward, there is a need for device libraries, so all children can have access to needed devices,” said Rukmini Banerji, Pratham CEO.

About a quarter of children had access to some form of online education, whether content shared through WhatsApp or live classes, while over 20% listened to lessons broadcast on television and radio. About 65% of students did some type of traditional learning activity during the week of the survey, with engagement ranging from 44% in Jharkhand to almost 90% in Kerala.

“As students return to school, it is important to start by assessing where they are, rather than teaching from where the curriculum thinks they should be. Teachers must be given the tools and agency to carry out such an assessment, so that no child is left stranded,” said Dr. Wadhwa.