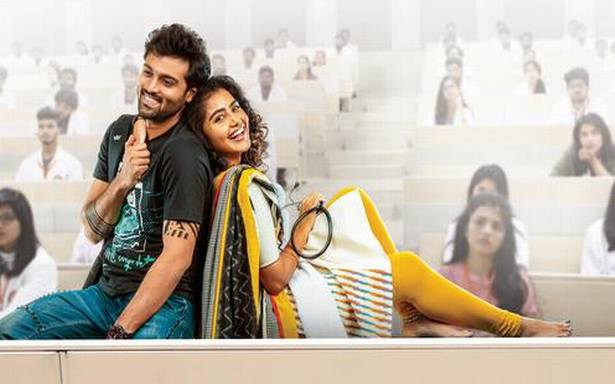 The Telugu film Rowdy Boys, which introduces producer Dil Raju’s nephew Ashish Reddy as the leading man, is like a cocktail of things that don’t blend together well, but is palatable now and then. It tries to be a coming-of-age story of an aimless guy caught in campus wars, finding romance and a purpose in life. Binding the story together is Devi Sri Prasad’s music. His medley of compositions in the last hour perks up the film.Rowdy Boys

The story unfolds in two campuses — a medical college and an engineering institute — situated beside one another. The rivalry between the two colleges gets fuelled whenever students from one campus try to court a girl from the other campus. The film opens with a cringe-inducing scene showing engineering boys harassing a female medical college student. How the boys redeem themselves is told through a long-winded story of Akshay (Ashish Reddy) who falls in love with Kavya (Anupama Parameswaran), a medical college student two years senior to him.

The first act establishes Akshay as an incorrigible brat who causes heartburn to his father (Srikanth Iyengar). A lavishly mounted intro song involves students of both campuses and later shows their ugly battles. At one point, Akshay waves his college flag from atop a burning bus and is proud of being talked about in news channels.

Director Sree Harsha Konuganti contrasts Akshay with Kavya and Vikram (Vikram Sahidev), bright students of the medical campus. Vikram is no angel, but knows to wait for the right moment. The engineering students, meanwhile, are helped by a senior student (Karthik Ratnam) to settle scores.

The story introduces a live-in possibility where a wayward Akshay is in sharp contrast to a focussed Kavya. In a strange way, this film reminded me of Wake up Sid, though both stories are poles apart in treatment.

The story also hinges on Kavya’s journey. She doesn’t see Akshay for who he is, blinded by the campus wars, and takes it on herself to care for him. She does all she can while he lazes around in a house where they supposedly struggle to make ends meet; never mind that the house looks like a designer pad filled with arty decor.

The drama picks up when Kavya begins failing in studies and wants to get back to her former self. Akshay’s turnaround, from then on, is shaped by taking cues from many romantic dramas of the past.

The biggest issue with Rowdy Boys is that it can remind you of a bunch of older films, to the extent that it ends up like a patchwork of inspired sequences.

Ashish and Vikram have screen presence and are fairly adequate, while Anupama Parameswaran stands out. She’s good; had the role and the story been written better, she would have had scope to make a lasting impression.

Ultimately, this film belongs to Devi Sri Prasad who anchors it with his exuberant music.