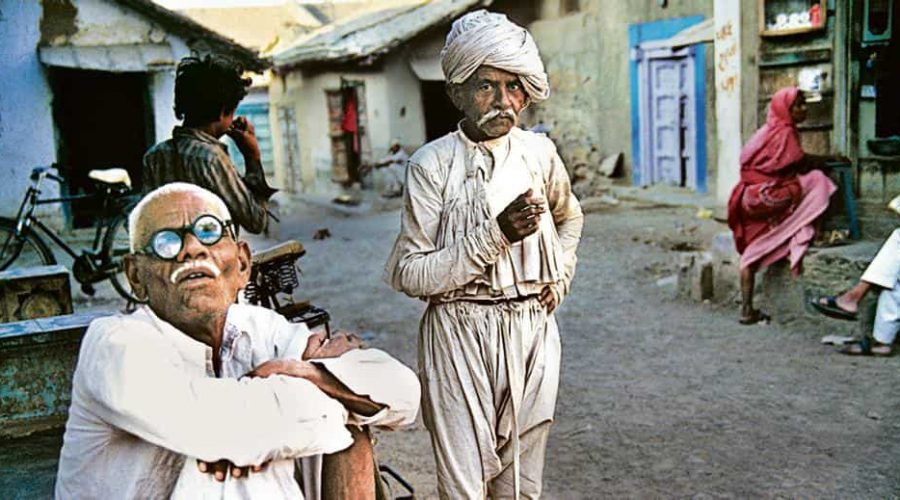 Ratno Dholi, a selection of Gaurishankar Joshi’s (Dhumketu was his pen name) short stories, translated from the Gujarati by Jenny Bhatt, is among the best short story collections to have emerged from India in years. It features refreshingly robust plots, character development that makes you feel compassion for the characters, and a powerfully realistic depiction of rural Indian society, with its complex interplay of caste, class and gender. The 26 stories in this collection were chosen from each of Dhumketu’s 24 volumes of short stories.

The translator writes in her introduction, “Had this writer been more widely translated and read, his stature and skill as a pioneer of the literary short-story form in Gujarati would have been acknowledged as equal to that of Tolstoy, Chekhov, Tagore, and Premchand in their respective cultures and languages.” Most readers would agree wholeheartedly with this statement. Dhumketu was staggeringly prolific: according to the introduction, he wrote over 500 short stories, “twenty nine historical novels, seven social novels, numerous plays, travelogues, essays, literary criticism, and memoirs, not to mention the painstaking translations of writers and poets like Kahlil Gibran, Rabindranath Tagore, and others”. Dhumketu was a giant of Gujarati and evidently Indian literature.

What strikes you first of all, is Dhumketu’s deep as well as wide-ranging power of observation and creative inclusion: the short stories touch upon each stratum of rural society, from the poorest labourer to the biggest landowner, from young girls to old men, and people of various castes. Usually, they face difficult circumstances. And usually, these circumstances stem from the natural operations of rural Indian society. Against these realistic backdrops, the characters usually find themselves in archetypal situations: a son’s longing for his father’s attention and love, a mother’s sacrifice of her son, a father’s yearning to hear news of his daughter, a man’s penchant for sabotaging others, the lure of adultery squaring off against the motivation to be loyal in marriage. These make for powerful plots, which Dhumketu handles with sensitivity and with a sense of the subtly moving that is never mawkish.

Without sloganeering, Dhumketu punctures the myth of the idyllic Indian rural society, and does so in an ingenious, aesthetic manner that delights as it edifies. The society depicted in these stories is rigidly organized according to caste and the Hindu religion, is bitchily gossipy, traditionalist, and frequently callous in the way in which it treats its weakest members – a far cry from the idealized notion of a village that is the object of nostalgia for some Indian city dwellers. What does it say about Indian society that Dhumketu’s mission in most of these stories is to generate compassion for the people who are at the receiving end of society’s malice? Indeed, Dhumketu’s protagonists hail from different backgrounds, but have one thing in common: they are fashioned to be the recipients of our empathy, our compassion. Plenty of the author’s protagonists are girls or women, negotiating their arduous way through patriarchal, mosogynistic or downright exploitative or violent circumstances. But they are not passive, not victims, they retain spirit and dignity even in their terrible situations. Dhumketu evokes compassion, not pity for his protagonists. Of course, these stories were selected by the translator, and so reflect her sensibilities as much as the author’s.

It would be a mistake to suppose, however, that Dhumketu wrote only of the society that he saw. Also in this collection is Tears of the Soul, a story about Amrapali, the beauty from the ancient republic of Vaishali, who is coerced to become a courtesan and eventually, to give up her son for the good of the republic. Another story reminds us that Dhumketu’s imagination even ventured into realms that are not inspired by realism. The story The Rebirth of Poetry is essentially a parable but can also be read as speculative fiction. It deals with a society that has eradicated disparities in social and economic status and even variations in personal appearance and abolished creations of the imagination in order to create a scientifically regulated, harmonious society. This story asks the condition, ‘What is the essence of human living?’ ‘What is the human condition?’

For the most part, the English translation is reasonably fast-paced, and eminently accessible. The occasional use of Gujarati words and interjections typical to Gujarati lend a conversational tone to the work. The language is simple, and approximates the way that many Indians speak. Of course, this means that in some places, the translation appears as such. Sample this sentence: “Everything appeared new-new to him.” For the most part, however, most readers might imbibe the text with delight, as I did.

This collection is an essential read.

Suhit Kelkar is an independent journalist. He lives in Mumbai.