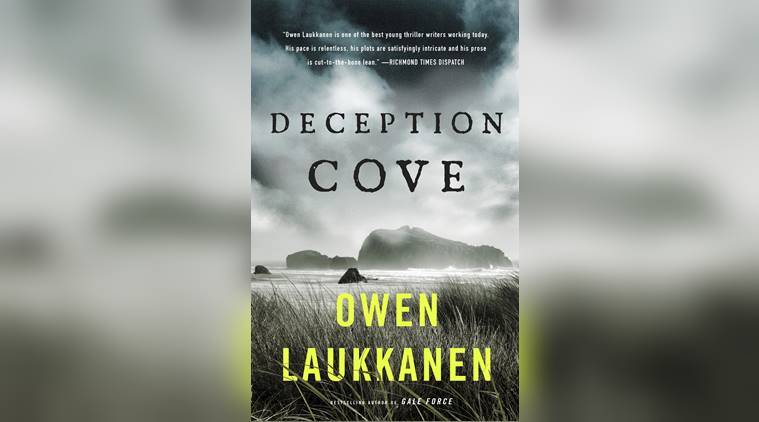 It would be easy for Owen Laukkanen’s superb “Deception Cove” to evolve into just a dog story about the power and love of a devoted canine — and, indeed, it does include that. But “Deception Cove” also insightfully explores the recovery of former soldiers, prisoners re-entering society and how one’s tough exterior can obscure fragile emotions. In “Deception Cove,” second chances are granted.

Former Marine Jess Winslow came back from Afghanistan with a severe case of PTSD. While she was gone, her husband Ty drowned while he was drunk, leaving her in debt and “not much more than bad memories and no clue what to do with herself next.”

Her only salvation has been her rescue dog, Lucy, so in tune with Jess’ moods that the dog can tell when Jess is about to have an attack or is having a nightmare. But now Lucy has been seized by the local sheriff’s deputy Kirby Harwood, whose threats to Jess may have caused the therapy dog to attack him. The corrupt Kirby insists that Jess knows where Ty hid a package that he wants.

Jess isn’t the only one concerned about Lucy. Mason Burke has one goal after finishing his prison sentence in Michigan — he wants to find out what happened to Lucy, whom he trained while he was behind bars. As she did for Jess, Lucy gave Mason a purpose, a will to live and a comfort that he had never experienced. He only wants to know that Lucy is in good hands. But when Mason finds out she may be euthanized, he travels to Deception Cove to save the dog.

Dog lovers will want to know immediately that Lucy is not harmed and comes out all right.

Still, this launch of a new series is a first-rate thriller with plenty of action that Laukkanen masterfully controls while also delving deep into the personas of Jess and Mason.

Both are fully fleshed-out characters whose strengths and foibles are well explored. Both must find their way to re-enter society — Jess because of her PTSD and Mason because he was imprisoned for 15 years, since he was 18 years old.

The author also shows the humanity of even the villains, who sometimes may have plausible, even understandable motives for their actions. Laukkanen delves deep to show the bond that real therapy dogs have with people. Jess knows that “she couldn’t survive without Lucy, not alone. Not for much longer, anyway.” Yet, at no time does Laukkanen stoop to anthropomorphism. Lucy is a dog — a great dog — but also a dog, making “Deception Cove” even more rich in its storytelling.

More visits with the characters of “Deception Cove” will be most welcomed, as will more time with Lucy.