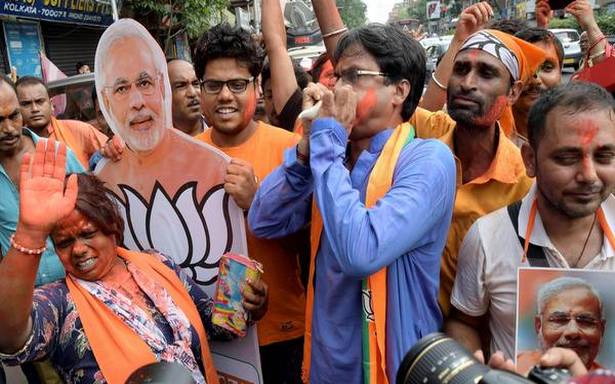 It took almost 40 years since its inception in 1980 for the Bharatiya Janata Party (BJP) to truly reach West Bengal. In the 17th Lok Sabha election, the BJP not only arrived in West Bengal but almost conquered it.

The result is spectacular for the BJP. In the 2014 Lok Sabha election, it won only two seats and secured about 17% of the votes. In the 2019 election, besides bagging 18 parliamentary seats out of 42, it also raised its vote share to 40%. On both accounts it closely matched the ruling Trinamool Congress, which secured 22 seats (a loss of 12 seats compared to 2014) with a vote share of 43%. The Trinamool managed to maintain its south Bengal bastion while the BJP made big inroads into the northern and western parts of the State. Since the BJP is a relatively new entrant in the map of competitive politics in West Bengal, the saffron mandate raises a number of pertinent questions. Lokniti’s post-poll survey data might hold some answers.

The moot question, however, pertains to the nature of polarisation. Given the much-publicised Hindutva agenda of the BJP and the alleged Muslim appeasement of the Trinamool, the issue of communal polarisation immediately crops up. This gets bolstered by the fact that among the sampled Muslim electorate, there was overwhelming support for the ruling Trinamool. And not just Hindu upper castes, but also Other Backward Classes, Scheduled Castes and Scheduled Tribes voted for the BJP in large proportions.

Although 43% of the voters liked Ms. Banerjee more than Mr. Modi as a leader, Mr. Modi was not far behind (37%). Mr. Modi’s popularity at the national level prevailed over Ms. Banerjee’s popularity — 42% of the respondents preferred him as the next Prime Minister, while only 13% who preferred Ms. Banerjee. This finding is significant considering that all surveys done by Lokniti between 2017 and 2018 had found that Ms. Banerjee was far more preferred than Mr. Modi for the post of Prime Minister. Interestingly, voters’ assessment of the State government was slightly better than their assessment of the Central government — while 64% said they were satisfied with the performance of the Mamata Banerjee government, 61% expressed their satisfaction with the Modi government. Yet, Ms. Banerjee could not capitalise on this.

In his public meetings in West Bengal, Mr. Modi spoke at length about the developmental achievements of the National Democratic Alliance government at the Centre and termed Ms. Banerjee as the “speed breaker” in Bengal’s development. He stressed the need to restore democracy in Bengal, which under the Trinamool regime had been seriously undermined. Unable to counter Mr. Modi politically, Ms. Banerjee resorted to personal attacks. This resulted in more voters moving towards the BJP. Mr. Modi’s strategy was successful in influencing the electorate in general and the younger voters in particular. The BJP’s success vis-à-vis the Trinamool was quite noteworthy among those aged between 18 and 35 years — it was ahead of its rival by six percentage points among this segment. On the other hand, the Trinamool was ahead of the BJP by 10 percentage points among those aged above 35 years.

The decisive entry of the BJP into West Bengal obviously raises the issue of further communal polarisation in a State where a strong non-Hindu population can be a potentially sensitive factor. But the survey data suggest that despite political polarisation at the moment, full-fledged communalisation may not occur immediately. Besides the fact that only a tiny segment of the electorate supported the demolition of the Babri Masjid in 1992, a huge majority (about 84%) holds that India is a country of all religions equally, not just Hindus.

The West Bengal verdict is indicative of the emergence of the BJP as a strong challenger to the ruling Trinamool. This has implications for national politics as well. For the State, it means that bipolarity may continue to mark competitive politics in the State.

05/27/2019 Lifestyle Comments Off on Post-poll survey: when the Left moved right in West Bengal
India