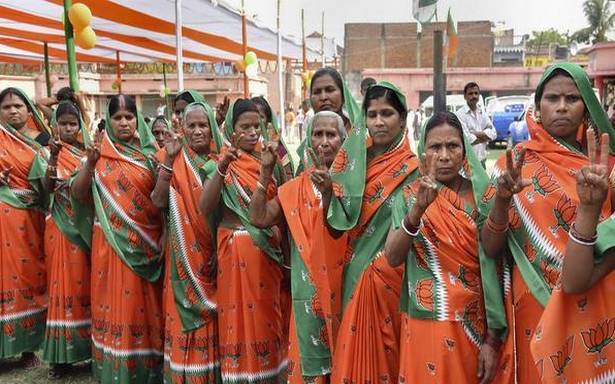 Previous National Election Studies show that the Bharatiya Janata Party (BJP) has traditionally received less support from female voters than male voters. Despite the BJP’s spectacular victory in this election, the party continues to have a gender disadvantage of three percentage points among women voters at an all-India level. The Congress, a party that is traditionally favoured by women, was supported by more or less an equal percentage of men and women, and so were the Bahujan Samaj Party and its allies and the Left.

Table 1: Gender disadvantage to the BJP among women voters

The gender disadvantage for the BJP was not uniform across the country, however. Among the Hindi heartland States, Madhya Pradesh and Rajasthan saw the highest gender disadvantage for the party, where the gap between men and women was seven and five percentage points respectively. However, in Chhattisgarh, Uttarakhand and Haryana, the party saw more women voting for it. In Himachal Pradesh and Uttar Pradesh, the number of women and men voting for the party was the same.

The Congress support base among women was more or less balanced across all social groups, except among the upper castes, Muslims and Adivasis. On the other hand, the BJP enjoys much higher support among young women voters as well as upper caste, educated and rich women voters. Across most social groups, more men voted for the BJP than women from the same group. This was not the case with Congress voters, where gender-wise support for the party across different social groups was more balanced.

Table 3: Social Profile of Congress and BJP Voters by Gender

Although the overall gender disadvantage for the BJP persists (i.e., less support among women than among men), the disadvantage is less compared to what it was in 2014. Back then, 29% of women had opted for the party. This rose to 36% this election. The gap between men and women voters who voted for the BJP has seen a marginal decline from four percentage points in 2014 to three percentage points in 2019. We also see that more women (along with men) have shifted from the Congress to the BJP than vice-versa between 2014 and 2019. A considerable rise in the Prime Minister’s popularity among women voters since the 2014 election could have affected this shift.

Table 4: Women’s vote in Lok Sabha Polls for the Congress and the BJP

Another reason could be a result of the various schemes launched by the Modi government. When voters were asked to name one policy or programme of the Modi government that they liked the most, the Ujjwala Yojana, which is directed at women, was most popular. This was followed by Swachh Bharat Abhiyan, Jan Dhan Yojna, Pradhan Mantri Awas Yojana and Beti Bachao, Beti Padhao. An equal proportion of men and women (34%) in our study reported to have benefited from the Ujjwala Yojana. Among women beneficiaries of this scheme, more women voted for the BJP compared to those who did not benefit from it (41% and 33% respectively). Among women beneficiaries of the Jan Dhan Yojana, 42% of women beneficiaries opted for the BJP compared to 34% of non-beneficiaries.

There is thus some strength to the argument that despite its overall gender disadvantage, the BJP was able to attract more women voters to it this time as a result of a rise in Mr. Modi’s popularity and the impact of his government’s schemes.

Table 5: Shift among the voters from Congress to BJP

05/26/2019 Lifestyle Comments Off on Post-poll survey: when schemes translate into votes
India