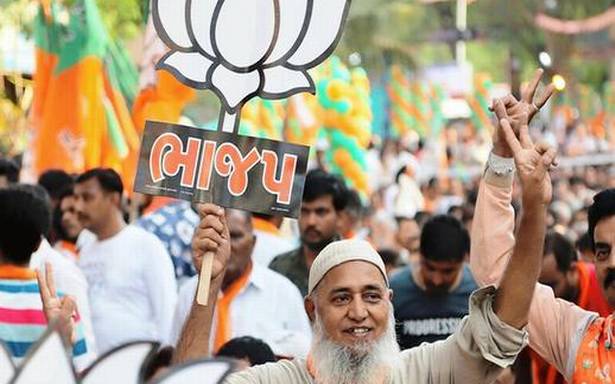 Gujarat has a long tradition of pro-Jan Sangh, pro-BJP politics and Maharashtra is the latest recruit to the BJP fold. Only Goa still prevaricates

If Madhya Pradesh and Rajasthan are characterised as ‘BJP versus Congress’ States, the BJP can safely treat the two western States of Gujarat and Maharashtra as ‘no contest’ States. Twice in a row, the two States have refused to look beyond the party. Goa is slowly emerging as a BJP bastion — with a limitation. Of course, the three cases present us with three different routes to dominance by the BJP, although the net political outcome might appear uniform. The BJP has added 49 MPs in both the previous and current Lok Sabha from Gujarat and Maharashtra alone.

In Goa, the rise of the BJP has been shaped by the usurpation of the local space cultivated by the Maharashtrawadi Gomantak Party. Like many other smaller States with a significant non-Hindu population, in Goa, too, the BJP is saddled with a critical challenge. It entered these States by adroitly appropriating the religious divide through its pursuit of Hindutva; nevertheless, continued electoral dominance would require a broad-basing of its support. It remains to be seen how the BJP evolves a strategy to become acceptable to non-Hindu sections while at the same time retaining its Hindutva argument in Goa.

Congress in a meaningless space

Gujarat under the BJP almost mirrors West Bengal under Left rule. It is characterised not merely by the dominance of a single political player over a long period; it also echoes the Bengal experience of deep penetration by the dominant party into civil society. Both in 2014 and now, the BJP has had multiple advantages in the State: a demoralised Congress that is tired of languishing in a meaningless space called Opposition; a more or less broad umbrella coalition of regions and sections of Hindu society; convergence of interests of trade, industry and the ‘neo’ middle class; regional pride that a Gujarati leader leads the country; and a civil society that is willing to ignore cracks in the ‘Gujarat model’. So, it is no wonder the BJP did so well in the State. Winning all 26 seats remains an extraordinary performance that speaks volumes about the euphoria around Mr. Modi’s leadership and the inability of the Congress to challenge the party’s narrative and social coalition in the State. The latest results further deepen the crisis in the State Congress because the limited gains it had made in the last Assembly election are now wiped off and it is going to be very difficult to avoid an exodus from the party.

No durable base, yet victorious

Maharashtra’s route to shaping the BJP’s dominance has been different on many counts.

First, the party is still not able to carve out a durable base for itself in the State. Its victories in 2014 and 2019 have come riding on the back of uncertain social equations. Second, competitiveness — though not reflected in the outcome — has not completely disappeared in Maharashtra. That is why the BJP chose to make peace with its warring ally, the Shiv Sena, on the eve of elections. It is another matter that the BJP may today rue that decision because it may have bagged quite a few more seats for itself if it had contested alone. Third, in Maharashtra, the Congress was in power for 15 long years and the BJP has been in the saddle for just five years. Thus, the societal dominance that it enjoys in Gujarat is somewhat elusive in Maharashtra as of today. Above all, in Maharashtra, the BJP’s emergence is more due to the failures of its rivals — the Congress and the Nationalist Congress Party. These two parties have not only exported their many district-level leaders to the BJP, but have also ceded ground to the BJP among their long-time social base, the Maratha community. In any case, though shallow compared to Gujarat, the BJP has ensured electoral dominance in Maharashtra in the past two parliamentary elections. Given its share of total seats in the Lok Sabha and also given the size of its economy, Maharashtra’s importance to national politics need not be overstated. As such, if the BJP manages to consolidate its position in the State, one can only conjecture the extent of importance that Maharashtra would have for the BJP’s long-term future nationally.

Overall, the extended west (including Rajasthan which was discussed in this series earlier) is not far behind the north in being a BJP stronghold. If Rajasthan and Gujarat have had a long tradition of pro-Jan Sangh, pro-BJP politics, Maharashtra is the latest recruit to the BJP fold while Goa still prevaricates.

05/28/2019 Lifestyle Comments Off on Post-poll survey: western command of the BJP
India