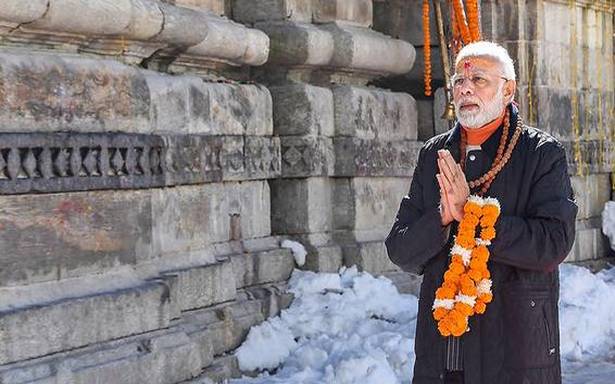 Narendra Modi was more popular among those who had not heard of the air strikes, according to the The Hindu CSDS-Lokniti Post-poll Survey 2019

In Uttarakhand, the BJP repeated its 2014 performance by winning all five seats. Three out of every five voters in the State voted for the BJP as the vote share of the ruling party crossed the 60% mark, a gain of nearly six percentage points from 2014. The BJP was able to secure massive wins in all five seats and improve its victory margins everywhere. In three seats — Garhwal, Nainital-Udhamsingh Nagar and Tehri Garhwal — the party’s victory margin over the Congress was over 3 lakh votes, and in two seats — Almora and Hardwar — the margin was over 2 lakh votes.

An analysis of the voting choice data from the Lokniti post-poll survey in the State reveals that the BJP’s victory is primarily due to a massive consolidation of upper castes and Other Backward Classes (OBC) who together constitute over 60% of the State’s population. Four out of every five upper castes and OBCs voted for the BJP, and this massive consolidation rendered the support of Scheduled Castes and Muslims for the Congress ineffective.

Satisfied with the government

The Lokniti survey expressed high satisfaction not just with the performance of the Modi-led Central government but also the Trivendra Singh Rawat-led State government ensuring a double advantage to the BJP. Over 80% were satisfied with the former, and about 73% with the latter. Like elsewhere, Prime Minister Narendra Modi’s personal popularity also seems to have played a role in the BJP’s win. The survey found Mr. Modi to be the choice of 59% of the respondents for the post of Prime Minister, way ahead of Congress president Rahul Gandhi who was the choice of merely 24% respondents. What’s more, 29% of BJP voters said that they neither looked at the party nor the candidate but instead voted in Mr. Modi’s name. Interestingly, this popularity of Mr. Modi does not seem to have been on account of the Balakot strikes alone; the survey found that those respondents who said that they had not heard of the Balakot strikes were far more likely to want Mr. Modi as Prime Minister than those who had.

In fact, a counter-intuitive finding that the survey throws up is that the Balakot strikes may not have been a major factor in the BJP’s spectacular win as is generally believed. When voters were asked about the most important issue that they kept in mind while voting, only about 2% said they had voted on the issue of national security and Balakot. For most respondents (31%), development mattered most followed by unemployment (17%). Moreover, the survey also found the BJP’s vote share to be far greater among those who had not heard of the strikes than among those who had. This is important because nationally we find a reverse trend, that is, the BJP to have done better among those who had heard of Balakot than among those who had not. Many respondents in Uttarakhand were also of the opinion that the credit for the Balakot strikes should be given more to the Indian Air Force (44%) than the Modi government (16%). These numbers too were found to be higher than the national average.

05/25/2019 Lifestyle Comments Off on Post-poll survey: No Balakot effect on the 2019 Lok Sabha Election in Uttarakhand
India