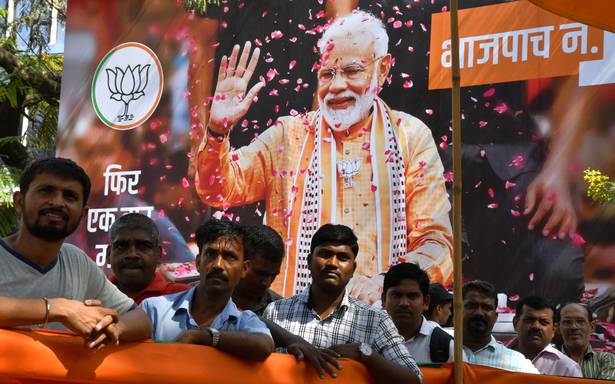 The second consecutive victory of the BJP-Shiv Sena alliance in Maharashtra in Lok Sabha elections indicates that there is now stability in the State. If the 2014 election marked the demise of the dilapidated Congress system in State politics, this time’s outcome seems to have confirmed the arrival of a new party system in which the BJP is likely to be the ‘Big Brother’.

A hold on all regions

In this election, the BJP and Shiv Sena have won 41 of the 48 seats (the BJP won 23 and the Shiv Sena 18, the same as in 2014) and claimed nearly 51% of the vote share, which is higher than last time. The Congress could win only one seat, Chandrapur, and there too the party candidate was ‘imported’ from the Shiv Sena. The Nationalist Congress Party (NCP) was hoping to regain its lost ground in this election, especially in western Maharashtra. However, it could win only four seats, three of which came from its traditional stronghold of western Maharashtra. There too, the Pawar family faced a major setback when one of its young family members lost the election to a Shiv Sena incumbent. The All India Majlis-E-Ittehadul Muslimeen won its maiden seat when it defeated a Shiv Sena veteran in Aurangabad by a slim margin. Elsewhere, the party, in alliance with the Vanchit Bahujan Aghadi (VBA), played a major spoiler for the Congress-NCP alliance in many key constituencies.

Other than these stray exceptions, the saffron alliance maintained a complete hold on all regions of the State. Vidarbha and north Maharashtra have been strongholds of the BJP for many elections now. Since 2014, the BJP, in alliance with the Sena, has also been able to establish its dominance in the more urban and somewhat more cosmopolitan Mumbai-Thane region where its vote share shot up to almost 60% this time. The consolidation of support for the BJP and the Sena in this region also neutralised the possible impact of Raj Thackeray’s Maharashtra Navnirman Sena (MNS), which did not contest the election but nevertheless campaigned against the BJP-Shiv Sena alliance.

The near-complete victory of the BJP-Shiv Sena alliance is mostly a pro-incumbency sentiment that goes along with the national mood. Similar to many other States, according to our data, the State-specific context of the election did not matter much for the voters. The BJP could pull off its success despite a deepening agrarian crisis, simmering discontent among Marathas, and a comparatively weak regional party organisation.

The alliance has been able to win support across the social spectrum this time. The Congress had already lost support among the poor, Adivasis, and a large section of Dalits over the past few elections. This time, the Dalit and Muslim votes were further divided with the arrival of the VBA that claimed substantial support from neo-Buddhist Dalits. The fragmentation of the Maratha vote continues although the NCP was able to regain some of its lost support from the community. The BJP, on the other hand, has carved out a new social equation that brings together the upper castes, OBCs, Adivasis, Hindu Dalit castes and the poor into its fold. This leaves out Muslims, the erstwhile dominant Marathas, and the politically active Buddhist Dalits. As Maharashtra is one of the most rapidly urbanising States, the BJP’s hold over urban voters indicates the durability of its base in the coming years.

The BJP-Shiv Sena alliance will soon face a challenge when the Assembly election takes place later this year. In the alliance’s first joint press conference immediately after the Lok Sabha election, the Shiv Sena graciously agreed to play second fiddle to the BJP. However, given its past record, the party will try hard for its own survival in the Assembly election, and so will the MNS. The MNS was clever in not contesting the Lok Sabha election. But for the sake of its own survival, it will be actively involved in the Assembly election and will complicate the structure of party competition. The rise of the VBA, which has claimed nearly 8% of the vote share in this election, will complicate the contest. To what extent the prevalent pro-incumbency sentiment among voters in the State will help the BJP neutralise these potential political contestations is an open question for now.

05/28/2019 Lifestyle Comments Off on Post-poll survey: Maharashtra replicates 2014, but with a higher vote share
India