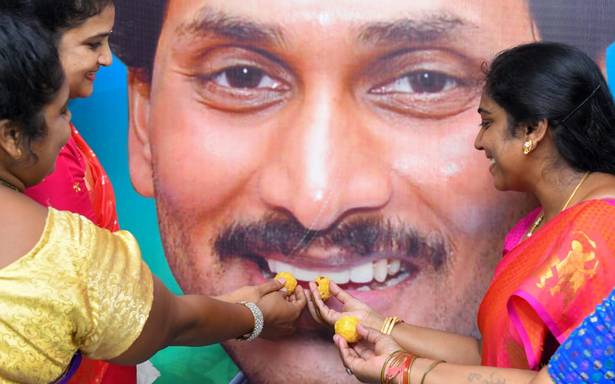 Votes of these sections and the Reddy community gave it a comfortable victory, according to The Hindu CSDS-Lokniti Post-Poll Survey 2019

The simultaneous elections to the Lok Sabha and the Assembly saw the YSR Congress Party win over four-fifths of the seats in both elections. The party won 22 of the 25 Lok Sabha seats and 151 of the 175 Assembly seats, securing nearly half the votes polled.

The TDP, led by N. Chandrababu Naidu, could manage to win only 23 Assembly and three Lok Sabha seats, with a little over 39% of the vote share.

The Congress and the BJP performed extremely poorly securing just 1% of the vote and winning no seat in the Assembly and the Lok Sabha.

The survey finds that the YSRCP did extremely well among not just the Reddy community but also among Dalits, voters from the lower economic class, young voters and farmers. Apart from the Reddy community, four-fifths of whom seem to have supported the YSCRP, farmers, Dalits and tribal people seem to have made the most significant difference to the YSRCP’s vote share. Farmers and the youth, in fact, were twice more likely to think that the TDP government had fully failed in looking after their interests than fully succeeded.

What also seems to have contributed to the TDP’s downfall is a slight erosion of its Kamma base and not being able to make any significant gains among the Kapus despite promising them Backward Class status. The BC status assurance given by Mr. Naidu may well have backfired as two-fifths of the BCs, many of whom are antagonistic to the Kapu demand, seem to have supported the YSRCP. In fact, on being asked whether the TDP government had succeeded or failed in looking after their caste and community’s interests, most communities barring the Kammas were more likely to say that it had failed than succeeded and this seems to have been a major factor in the TDP’s loss.

Table 2: Opinion of castes and communities on whether the TDP government has succeeded in looking after their community’s interests

But the Lokniti survey does not seem to indicate any massive anti-incumbency sentiment. Two of every six voters said that they were either somewhat or fully satisfied with the State government’s performance with only one-third expressing their dissatisfaction. Moreover, the survey found a slightly greater proportion of voters wanting the State government to return to power, 37% to 35%.

However, there was a large section of voters (28%) who did not give their opinion on the question and these silent voters seem to have voted for the YSRCP in large proportions. Similarly, the survey also reveals that only those who were fully satisfied (21%) with the government’s performance seem to have voted for the TDP and not those who were somewhat satisfied who constituted four of every 10 respondents.

Finally, as far as the Modi government is concerned, the respondents were not as enthusiastic about its performance. The survey found respondents to be three times more likely to be fully dissatisfied with its performance than fully satisfied.

Table 4: How many households benefited from Naidu’s schemes

05/26/2019 Lifestyle Comments Off on Post-poll survey: dalits and farmers solidly behind YSRCP in Andhra Pradesh
India