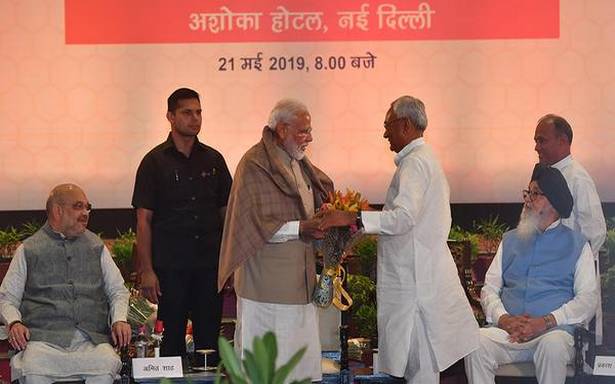 On a day when a group of Opposition parties approached the courts and the Election Commission, alleging tampering of electronic voting machines, Prime Minister Narendra Modi told 36 of his 39 NDA partner party leaders that at a time when the sheer size, scale and integrity of Indian elections were becoming a global brand, efforts were on to undermine the exercise.

He was speaking at a dinner hosted by BJP president Amit Shah where, in a show of strength by the NDA, senior leaders like Bihar Chief Minister Nitish Kumar, Shiv Sena chief Uddhav Thackeray and Lok Janshakti Party chief Ram Vilas Paswan were present.

The meeting saw the passing of a resolution by NDA leaders introduced by Mr. Paswan, reposing faith in the leadership of Mr. Modi. Three allies — the Mizo National Front, the Tiwa Jaatiya Oikiya Manch and the United Democratic Party — sent their support for the resolution in writing.

Union Home Minister Rajnath Singh, briefing reporters after the dinner, said the resolution appreciated the work of the government under Mr. Modi in the last five years.

“Prime Minister Modi in his remarks said that the NDA reflected the aspirations of the people and the NDA had become an organic entity, far more than an alliance. He also said that the controversy over EVMs was an effort to undermine the integrity of the Election Commission,” he said.

Mr. Paswan, who also addressed the press, said the Opposition’s protest over EVMs was an effort to create an alibi for its anticipated loss on May 23.

“Why didn’t they protest when they won in Punjab, Chhattisgarh, Madhya Pradesh and Rajasthan? The NDA will win on May 23,” he said.

Earlier during an ‘abhaar milan’ or thanksgiving meeting organised by BJP chief Amit Shah for all members of the Union Council of Ministers, Mr. Modi likened his recent poll campaign to a pilgrimage.

Briefing reporters at the BJP’s national headquarters in New Delhi, where the meeting was held, Union Minister Narendra Singh Tomar said Mr. Modi remarked on the stand-out moments of the campaign.

“I have seen many elections but this one was beyond politics. Public was fighting them (the Opposition). I have campaigned in Assembly elections and undertaken political tours for the party in different elections. When I toured during these polls, it seemed that I was on a pilgrimage,” Mr. Tomar quoted Mr. Modi as saying.