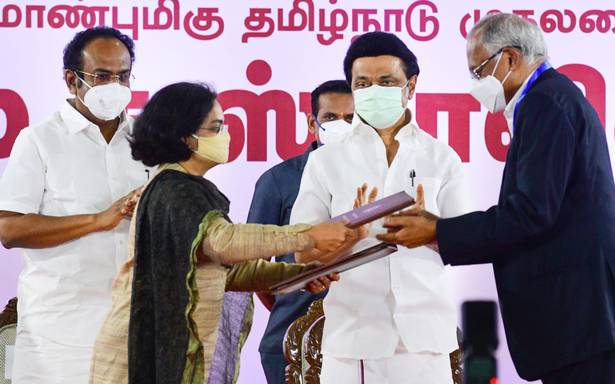 The CM exchanged MoU with 59 firms with a cumulative investment of ₹35,208 crores in Tamil Nadu

The State Government will set up Neo-Tidel Parks in tier-2 and tier-3 cities as part of the next level of the information technology revolution, said Tamil Nadu Chief Minister M.K. Stalin on Tuesday.

Addressing at the ‘Tamil Nadu – Investors’ First Port of Call’ Investment Conclave held at CODISSIA Trade Fair Complex in Coimbatore, he recalled that then Chief Minister M. Karunanidhi inaugurated the Tidel Park in Chennai in 2000. "This was an important factor in the information technology revolution of Tamil Nadu. To take this to the next level, Neo-Tidel Parks will come up in tier-2 and tier-3 cities," Mr. Stalin said.

In Coimbatore district, a ‘Centre of Excellence’ for casting industries of this district, a group for coir processing industries in Pollachi and an industrial park in Sulur will be set up by the State government.

The Chief Minister urged the industry heads of the district to focus on areas such as manufacturing products for the aerospace and defence sector, modernising the knitwear and garment industries, becoming a leading manufacturer of electronic hardware and bringing out new inventions that could benefit the economically weaker sections of the society.

Mr. Stalin exchanged Memorandums of Understanding (MoU) with 59 firms with a cumulative investment of ₹35,208 crores and aimed at creating employment opportunities for 76,795 persons across several districts in the State.

The MoUs with the first batch of 52 firms were worth ₹34,723 crores and included Dalmia Bharat Green Vision, Adani Enterprises (Phase – 2), Larsen and Toubro, Hindustan Unilever Limited, Daicel Corporation and Makino India. The CM also exchanged MoUs with seven firms in the aerospace and defence sector with an investment worth ₹485 crores and 1,960 potential jobs opportunities across the State.

Apart from these, Mr. Stalin laid foundation stones for 13 projects with an investment commitment of ₹13,413 crores and employment potential for 11,681 persons and also inaugurated 10 projects with a cumulative investment of ₹3,928 crores which would employ up to 3,944 persons during the Investment Conclave.

The Chief Minister released the Tamil Nadu Fintech Policy 2021 for augmentation of investment in the fintech sector, launched the ‘Single Window 2.0’ mobile application and unveiled the directory of aerospace and defence industries in the State compiled by Tamil Nadu Industrial Development Corporation (TIDCO), a press release said.

He also exchanged an MoU with Dassault Systems for the establishment of a Centre of Excellence worth ₹212 crores in Chennai to enable the aerospace and defence firms and start-ups to utilise the latest design and engineering tools.

11/23/2021 Lifestyle Comments Off on Neo-Tidel Parks to come up in tier-2 and tier-3 Tamil Nadu cities, says CM Stalin
India