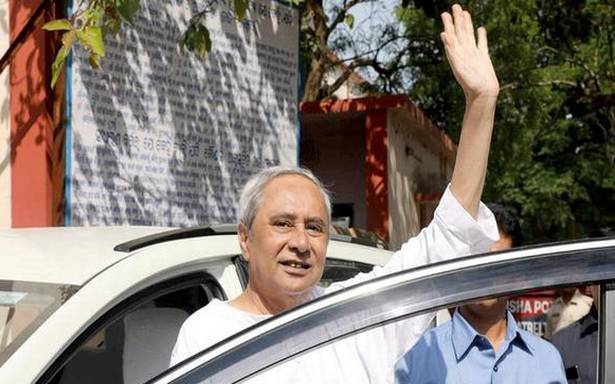 With the Biju Janata Dal nominees remaining ahead of their rivals in more than two-thirds of the Assembly seats in Odisha on Thursday, Chief Minister and party president Naveen Patnaik is all set to take charge of the State for a fifth consecutive term.

Notwithstanding challenges posed by the Opposition parties, Mr. Patnaik single-handedly campaigned across the State seeking votes for the BJD candidates in the simultaneous Lok Sabha and Assembly polls.

Mr. Patnaik’s predictions that the BJD would retain its hold over the State have been borne out by the results.

A day after Prime Minister Narendra Modi said at an election rally in Kendrapara that Mr. Patnaik’s government would be voted out and the BJP would form the government in the State, a confident Mr. Patnaik had responded with an invitation to Mr. Modi to attend his swearing-in.

Both Mr. Patnaik and Mr. Modi congratulated each other on Thursday evening for their victory.

In fact, the BJD was sitting pretty till a few months ago with its rivals — the Congress and BJP — competing with each other to displace it. However, unlike in the past, a resurgent BJP swept ahead of the Congress to pose a serious challenge to Mr. Patnaik.

The polling for the 21 Lok Sabha and 146 Assembly seats was spread over four phases — April 11, 18, 23 and 29 — which helped BJP leaders to campaign in the State extensively.

The overall Congress campaign remained weak, though party nominees put up strong fights at the individual level. With the Odisha Pradesh Congress Committee moribund, party president Rahul Gandhi attended only two meetings at Bargarh on March 15 and Balasore on April 25.

For the 72-year-old Mr. Patnaik, it was a no-holds-barred campaign. He undertook roadshows across the State covering around 1,000 km. Although many of his party nominees faced strong anti-incumbency, the Chief Minister successfully countered the BJP’s strong campaign.

The BJD founded by Mr. Patnaik in December 1997 has been winning a majority of seats in all Lok Sabha and Assembly elections since then.