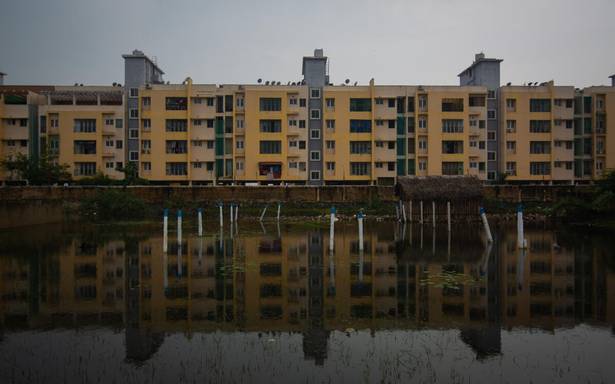 Coastal parts of Tamil Nadu may have to prepare for another intense spell of rainfall as a fresh weather system is likely to form in the next 12 hours, and concentrate into a depression. It is likely to reach north Tamil Nadu by early in the morning on November 11.

Vice Admiral R. Hari Kumar to be next Chief of Naval Staff

Vice Admiral R. Hari Kumar, presently Flag Officer Commanding-in-Chief (FOC-in-C) Western Naval Command, has been appointed as the next Chief of the Naval Staff (CNS). He will take over on November 30 when incumbent Admiral Karambir Singh retires from service.

Rain lets up, but woes of Chennai continue

On a day when Chennai had some respite from the rain, inundation cleared up in a few areas, but people were stranded and in need of help on Tuesday as the stagnant water was yet to be drained. Residents are approaching the next couple of days with dread as heavy rain has been forecast.

Why is the Home Ministry tasked to monitor foreign funds for NGOs, asks Supreme Court

The Supreme Court on Tuesday asked the government why the Ministry of Home Affairs (MHA) has been tasked to keep an eye on the inflow and subsequent outflow of foreign funds to NGOs under the foreign contributions regulations law.

The Supreme Court collegium, comprising top five judges, has recommended transfer of Madras High Court Chief Justice Sanjib Banerjee to the Meghalaya High Court. It has also made another recommendation to the Centre to transfer Justice Munishwar Nath Bhandari from Allahabad High Court to the Madras High Court.

Malala Yousafzai, the campaigner for girls’ education and Nobel Peace Prize laureate who survived being shot aged 15 by a Taliban gunman in her native Pakistan in 2012, has got married, she said on social media on Tuesday.

A tale of two meetings: India and Pakistan to hold different conferences on Afghanistan this week

Delhi and Islamabad will hold two parallel tracks on Afghanistan this week — the two meetings sharpening the divide between India and Pakistan and their view of each other’s role in the region.

At least 13 former Trump administration officials violated the law by intermingling campaigning with their official government duties, according to a new federal investigation.

Besides a few crucial factors, the Indian cricket’s ecosystem prioritising the second half of the IPL over focusing on preparations for the global event harmed the team

Rohit Sharma will lead India in the three-match T20 international series against New Zealand starting on November 17 in Jaipur. K.L. Rahul has been appointed as the vice-captain of the side.

Samajwadi Party president Akhilesh Yadav on Tuesday hit out at the BJP over the Supreme Court’s observations on the probe into the Lakhimpur Kheri case, charging that the saffron party decides whom to implicate and where to take the investigation. He also charged that the BJP’s three engines — Delhi, Lucknow and Lakhimpur — are destroying law and order in Uttar Pradesh.