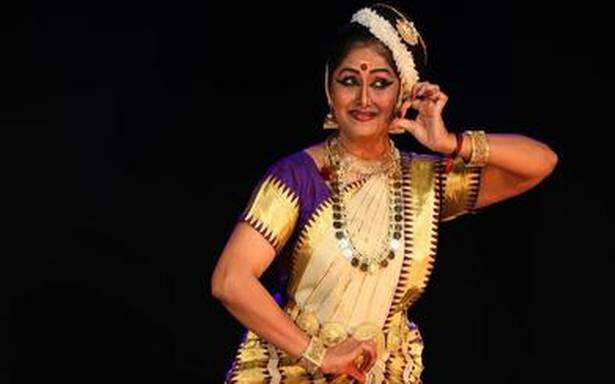 Kathakali enjoys enormous popularity — there’s a host of festivals exclusively dedicated to it, a huge number of artistes practise it, it has several training institutions and, most importantly, there are new ideas and approach constantly redefining its presentation. Mohiniyattam, on the other hand, the youngest and gentler of Kerala’s art forms, is still looking to reach a larger contemporary audience.

Though its origin is shrouded in mystery, Kalamandalam Kalyanikutty Amma, the dance’s 20th century doyenne, traced its beginning to the Devadasi system. One of her early disciples tried to establish a link between Mohiniyattam and Nangiarkoothu, the female counterpart of Kudiyattam. Certain others in the field have held that Swati Tirunal, in association with the Thanjavur Quartet, was instrumental in upholding this dance tradition. But none of these claims are supported by documentary evidence.

When poet laureate Vallathol Narayana Menon decided to resurrect Mohiniyattam at Kerala Kalamandalam braving all odds, he was least bothered about its rather insecure history. He had always been drawn to its feminine grace and tenderness and hence was eager to find a guru who had the willingness to pass on its organic qualities to the younger generation. Fortunately, the poet came across dancer Oriykkaledath Kalyani Amma and nattuvan Korattikkara Appuredath Krishna Panickar, who galvanised the Mohiniyattam kalari in Kalamandalam.

As to the question of what circumscribes Mohiniyattam from attaining the glory and fame it truly deserves, Deepti Omchery, Carnatic vocalist, academic and a renowned Mohiniyattam dancer, says that “the gurus of yore worked within the conventional framework with limited or little scope for innovation and experimentation. Though several talented dancers of the day have tried to reinvent the repertoire, its inherent slow tempo and limited movements have not helped them much.”

But perhaps what ails the dance form more is the dissension among Mohiniyattam dancers over the term ‘new’. Kalamandalam Kalyanikutty Amma was particularly against changing the traditional hairstyle. But some veterans like Kalamandalam Sathyabhama, the disciple of Thottassery Chinnammu Amma, went ahead and changed the traditional hairstyle and it soon became the norm. Kalamandalam Sugandhi, who was the first to appear on stage in this new hairstyle in the 1960s, lists several reasons for the dance form’s relative marginalisation. “First, even after its revival in the last century, we felt the absence of iconic artistes similar to Guru Kelucharan Mohapatra in Odissi or Vempati Chinna Satyam in Kuchipudi. Secondly, Mohiniyattam practitioners are too individualistic in their approach, which has resulted in dozens of styles emerging over the years. While the artiste is in the spotlight, the art form gets relegated to the background. We have also not worked much on getting opportunities to perform at major national and international festivals. And the state government has done little to support the dance form and its practitioners.”

Criticism apart, the stupendous efforts of two exponents based out of Kerala, Dr. Kanak Rele and Bharati Shivaji, have contributed immensely to the academic and aesthetic advancement of Mohiniyattam in the last century. Dr. Sunanda Nair, an accomplished dancer and the disciple of Dr. Rele, says that Mohiniyattam needs to shift “focus from the physical exquisiteness of the margam to the creation of a repertoire that testifies the tenets of classicism.” The dancers, she says, have worked hard for the flawless execution of the adavus, for fine-tuning body kinetics, and to ensure composure and grace. “I have been endeavouring to achieve this over decades. The wisdom or endurance to immerse oneself into the content and the craft is giving way to exhibitionism. Such tendencies will not help.”

Not all dancers think there is lack of recognition and support. For instance, Gopika Varma, a senior disciple of the late Kalyanikutty Amma, feels optimistic about Mohiniyattam’s future. “It has retained its individuality through a distinct style and costume. I see talented artistes performing at festivals across the globe. The lack of a masculine element could have hampered its popularity and the choreographing of dance dramas.”

Both Kudiyattam and Kathakali have had an overwhelming presence on the global cultural map for almost half a century. While most other states boast of just one classical dance form, Kerala has quite a few. When festival authorities or cultural organisations in India and abroad try to strike a balance during the selection, invariably the older art forms of Kathakali and Kudiyattam get preference.

Even at the pedagogy level, as Deepti Omchery points out, CBSE has removed Mohiniyattam from the curriculum because it hasn’t had any takers in the past few years. This seems to be a bit of a paradox, as the dance is taught and performed across other institutions including Kerala Kalamandalam, which offers graduate, post-graduate and doctoral programmes in Mohiniyattam, and there doesn’t seem to be a dearth of students either. Deepti says such decisions will demoralise young performers.

Meanwhile, dancers are experimenting with themes, costumes and styles, hoping to attract new audiences. The future is in their hands.

The writer is a critic and connoisseur of