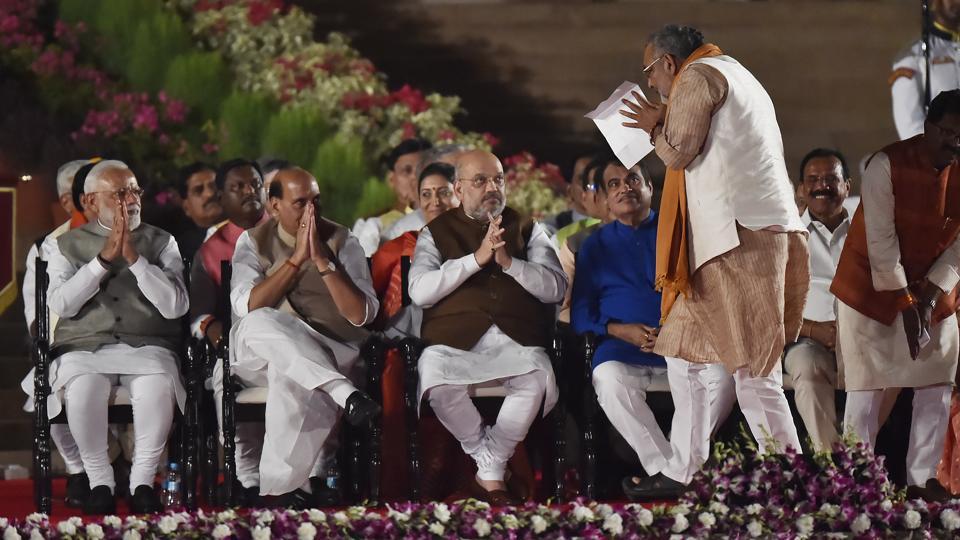 With the prime minister and ministers taking the oath of office and secrecy on Thursday evening at a grand ceremony in the forecourt of Rashtrapati Bhawan, and the formal allocation of portfolios on Friday, the new Narendra Modi government has finally taken full shape. The entire exercise had a clear Modi imprint all over it: the suspense and secrecy till the end about those selected to serve; the willingness to exercise power and remove ministers who the PM felt had served their time or had not performed; the participation of thousands at the swearing-in, converting what used to be a formal event into one which had a high degree of citizen involvement; and, finally, the appetite for risk taking by rejigging ministerial berths and awarding major responsibilities to new faces.

The changes at the top, particularly the Cabinet Committee on Security, are the most significant in Mr Modi’s second term. There are two new faces and two older ministers now have new portfolios. Bharatiya Janata Party (BJP) president, Amit Shah, is now the country’s home minister. With his reputation for being strong, decisive, competent and a micromanager, expect Mr Shah to get a grasp of a complex portfolio quickly. He will have major challenges to tackle, from the volatile situation in Kashmir to keeping India safe from any terror attack through robust intelligence and security mechanisms, from continuing the good work done to tackle the Maoist threat to modernising and reforming police systems. His predecessor, Mr Rajnath Singh, has moved to defence. This lends political weight to the ministry. Mr Singh will have to pick up both the technicalities of the ministry and urgently expedite the task of defence modernisation.

Ms Nirmala Sitharaman’s remarkable rise is a big political story of recent times. From defence, she now moves to finance at a time when the economy is in slowdown; structural crises, especially in banking, are yet to be resolved; investment is low; agrarian distress persists; and fiscal pressures are growing. The big surprise in the CCS is, however, the inclusion of Mr S Jaishankar as external affairs minister. This is an excellent choice, because his wide experience — with expertise on Russia, diplomatic positions in China and the US, and as foreign secretary — will bring great weight to Indian diplomacy. Mr Modi’s willingness to seek outside talent is a positive feature. With this core team at the top, Mr Modi has continued with some seniors in their old positions. For instance, Mr Nitin Gadkari or Mr Ravi Shankar Prasad; rewarded political winners like Ms Smriti Irani by giving her an extra portfolio; and made some significant additions by deploying performing ministers like Mr Piyush Goyal to commerce, besides railways, at a time when the international trade climate is tough. Modi 2.0 is now all set. It is time to get down to governance.