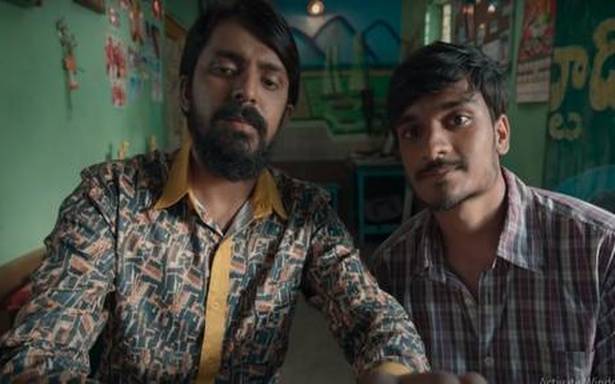 The Telugu feature film Mail, now streaming on Aha, is another reminder that there is no dearth of close-to-reality stories. Director Uday Gurrala ushers us into Kambalapally village in Mahabubabad district, Telangana, and captures people as they are, slowly unravelling their day-to-day lives and aspirations. Yet again, we have Venkatesh Maha (of Care of Kancharapalem) and Malayalam cinema to thank for encouraging more Telugu filmmakers to narrate stories that reflect region-specific ethos. After the recent Middle Class Melodies, this is another film that tries to keep things realistic and endearing.Mail

It looks like a simple story but has enough scope to show how people can use anything new as a tool of power to enforce a social hierarchy, or worse, take the gullible for a ride.

In the late 90s, the clunky personal computer and printer were prized possessions. Computer labs in schools and colleges were sanitised spaces — footwear at the door, and the PC was handled with trepidation and reverence. Internet penetration in rural pockets took time. Uday incorporates these nuances into this story set in Kambalapally in the mid 2000s.

Ravi Kumar (Harshith Malgireddy) eyes the monitor, keyboard, CPU and the UPS with awe when he goes to check his high school board examination results. Back then, those who knew to operate the PC considered themselves higher than those who don’t. The first half hour establishes the aspirational value of a computer course for a rural 18-year-old. For other folks, like Ravi’s father who toils in the fields, the computer is mysterious and unaffordable.

Ravi is wide-eyed in admiration when Hybath (Priyadarshi) opens a cyber gaming centre. Kamran’s background music equates Ravi’s yearning for the PC to a romance. A little later, Ravi falls in love with Roja (Gouri Priya), a fellow student. Had there been a contest between the computer and Gouri to win Ravi’s attention, it might have been a tough call!

The process of Ravi learning to use a computer, from Hybath, follows a wicked gurukul pattern. Ravi borrows money to buy liquor for Hybath and in turn, uses the PC.

The things that matter to students are delineated with subtle humour. Someone who flunked the exams is miffed with a friend who passed in third class, who in turn is annoyed at someone who scored first class. Ranks matter when looked at from the prism of parents who are roughing it out so that the next generation can have better jobs. Harshith is a delight to watch as the innocent and enthusiastic teen; Gouri as Roja and Mani as the friend Subbu perfectly fit into the film’s world. Priyadarshi is effective as the smug Hybath and this is another credible addition to his repertoire.

Once the admiration for the computer and social dynamics are established, nothing much happens for some time. The languorous storytelling is deliberate. Out of the blue, things take a turn when Ravi gets an email in his inbox. The rest of the story explores what happens when a gullible tech novice believes what he sees in his inbox.

A few other characters who until then have been on the fringes, gain prominence. Had this been a Malayalam film or an Anurag Kashyap film, things would have taken a dark turn.

However, the unexpected turn of events towards the end seems befitting to the characters. Mail is indie-spirited and has its heart at the right place. It isn’t completely engrossing; there are places I wish the story moved a little faster. The rooted milieu and the performances make up for it. Ravinder Bommakanti as the moneylender Shivanna and the other smaller rural characters are all well cast. The panchayat debate on computer virus and what follows is fun.

Sweekar Agasthi, who has emerged as the go-to composer for those who want to narrate rooted stories, delivers again. Uday also handles the cinematography along with Shyam Dupati and presents Mail in a documentary fashion, where the rustic beauty of the region is captured without indulgence.