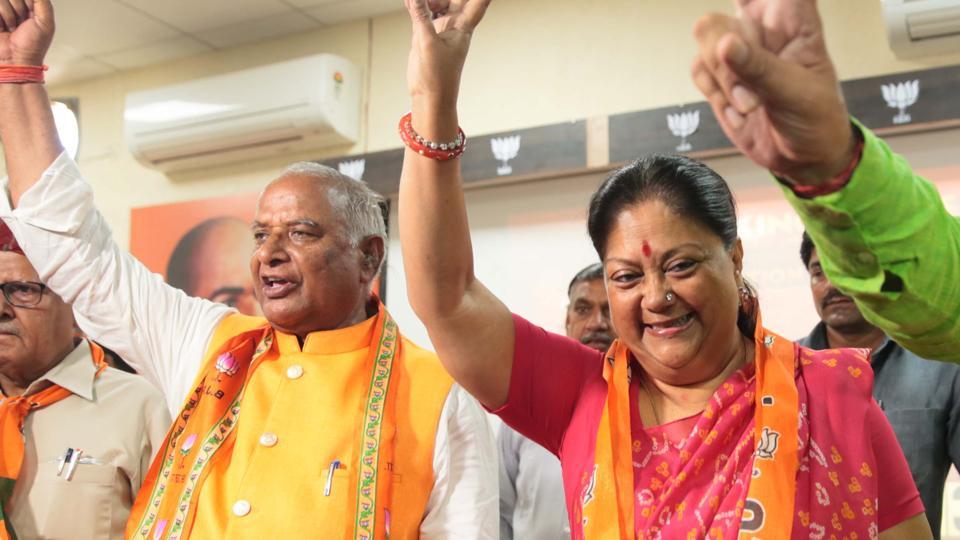 The victory of the BJP and its ally, the Rashtriya Loktantrik Party (RLP), on all 25 Lok Sabha seats in Rajasthan on Thursday was a virtual repeat of 2014 general elections.

Former chief minister Vasundhara Raje credited the victory to Prime Minister Narendra Modi, saying, “This is not a wave or a tsunami, this is the magic of NaMo.” She said the visionary leadership of Modi and Shah had helped the party register a historic win.

Addressing newspersons at the BJP office, she said, “I had stated earlier that all 25 Lok Sabha seats of Rajasthan will be won by BJP and more than 300 seats in the country, to form Modi government again.”

Also Read | Increase in voter turnout may have led to BJP victory in MP, Rajasthan and Chhattisgarh

Gehlot thanked the state people and Congress workers for “peaceful voting”. “The party workers worked hard in carrying out the message of party’s policies, programmes, manifesto and principles under the leadership of AICC chief Rahul Gandhi,” he said.

Congratulating Modi and NDA, state Congress president Sachin Pilot said, “We respect people’s mandate.” He said, “In democracy people elect government through their votes and Congress believes in democratic values; win or loss, people’s mandate is above all and our party respects it.”

Pilot said in the last five years, the Congress fulfilled the role of an opposition responsibly and with positive approach; the party made all efforts to raise people’s issues and rights. “Congress fought the elections unitedly under the leadership of AICC chief Rahul Gandhi and tried to contest on real issues. The history of the Congress is known for strengthening democracy.”

The BJP’s comprehensive win also underlined the fact that the verdict in the 2018 assembly polls was against former CM Raje while the support for Modi remained strong. “The win shows that the Modi factor negated the caste factor and the BJP was able to get support of all castes,” said BJP MLA Satish Poonia.

State BJP president Madanlal Saini termed the victory historic and said it was for the first time that the ruling Congress had got such a drubbing in the state.

RLP chief Hanuman Beniwal whose party formed an alliance with the BJP before the polls won the Nagaur seat with a comfortable margin of over 1.7 lakh votes. Beniwal credited Modi for the victory saying people had voted for the exemplary work the Modi government had done in the last five years.