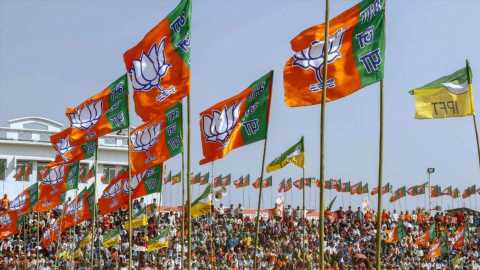 In this piece, we look at variation in reported wealth between the 2019 candidates of the two national parties, the Bharatiya Janata Party and Congress, breaking it down by declared occupation. To do that, we cross the occupation and net assets data contained in the affidavits that each candidate must fill when they file their nomination (“net assets” are a measure of the difference between the declared assets and declared liabilities of every contestant).

That data is extracted by the Association for Democratic Reforms (ADR) and merged with Trivedi Centre for Political Data’s (TCPD) own candidates’ data set. It is important to note that both these variables, assets and occupation, are self-reported and as such fairly unreliable, for at least five reasons.

First, the socio-professional categories that the candidates report are too broad and undifferentiated.

In particular, the categories of agriculturists, business or social workers are virtually meaningless in and of themselves, unless they are cross tabulated with assets, landholding size or other economic variables. Second, many candidates declare more than one profession, which blurs socio-professional categories and poses issues for classification and further analyses.

There are lawyers who also own factories and so on. Fourth, there are candidates involved in illegal or undeclared activities, which by definition are not captured by both the indicators of occupation and assets.

And lastly not all candidates declare their occupation. There are holes in the data.

Keeping these caveats in mind, and for this article, we have consolidated self-declared professions around six large categories that cover over 80% of all candidates.

Candidates with multiple declared occupations have been sorted into one category, which we think predominates.

We first look at the distribution of occupations amongst the BJP and Congress candidates.

We find little variation between the declared occupations across the two parties. Selfdeclared agriculturists make 34.4% and 31.3% of each parties’ candidates. Candidates declaring business as occupation make respectively 18.8% and 21.4% of the candidates. 11.2% of the Bharatiya Janata Party and Congress candidates declare to be in politics. There are slightly more candidates involved in social work within the Congress (11.2%) than in the BJP (9.2%). The Congress also has more lawyers (7.6%) than the BJP (4.8%). By and large, these differences are not very large.

For both parties, the four largest occupation categories listed above include about 75% of the candidates.

However, substantial variations appear once we closely inspect the distribution of net assets within each of the occupational categories. To do that, we calculate the median reported net assets of each parties’ candidates within the six broad professional categories. 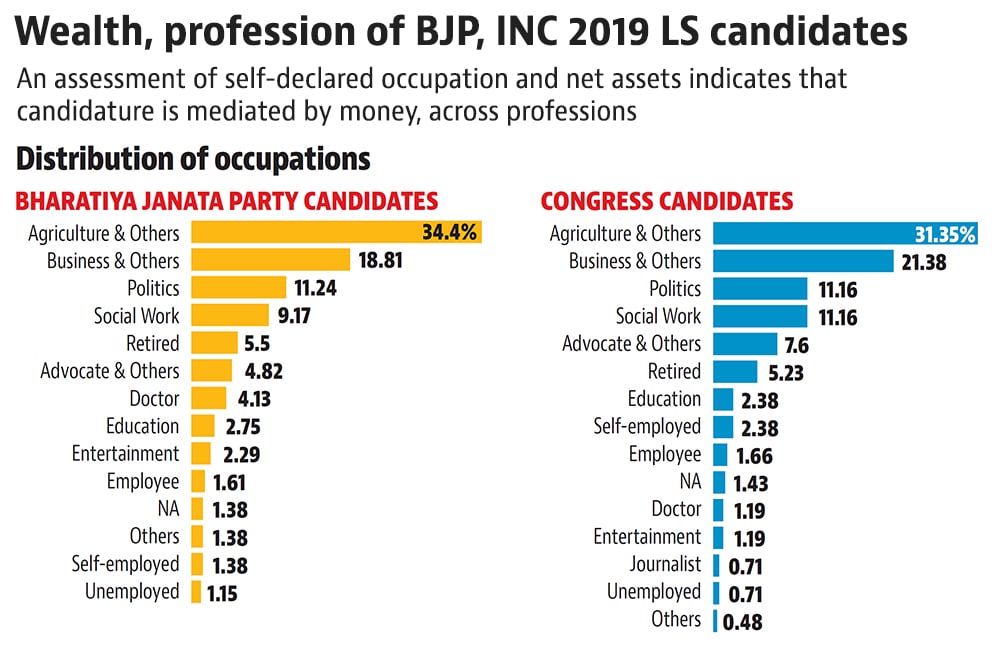 Candidates under the category of social work declare approximately 1 crore of assets for the BJP and 2 crores of assets for Congress. Their assets are also much lower than any other professional category. 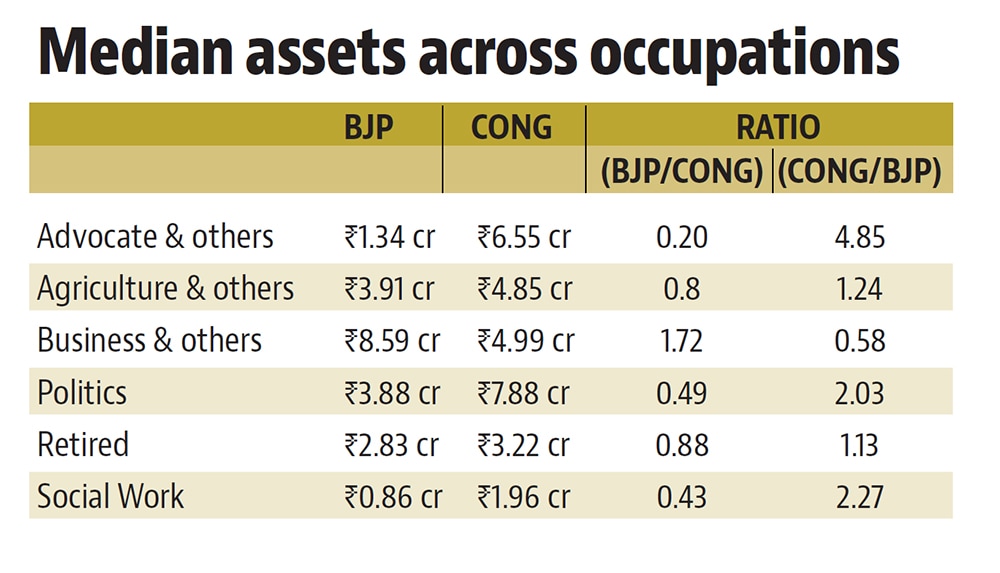 How do we make sense of this data?

The data itself does not provide any explanations for the observed differences in the reported net assets. For five of the six categories, Congress candidates have higher reported median net assets as compared to BJP, which is interesting since the BJP is reputed to have considerably more resources at its disposal than its opponents.

That inequality of resources does not seem to extend to the candidates. Richer Congress lawyers is not entirely surprising given the presence of highflying advocates in the party.

On the other hand one should look at what actually comprises Business & Others and how the activities are different along party lines to account for why the BJP’s net assets are close to double of the Congress.

What is certain is that the median assets of both parties’ candidates confirm that access to the candidature is mediated by money, across professions.

Few contest without high personal assets. This contributes to further skew the representativeness of the political class, whose sociological composition is already skewed in favour of upper and dominant castes. Gilles Verniers is Assistant Professor of Political Science and Co-Director, Trivedi Centre for Political Data, Ashoka University. Priyamvada Trivedi is Associate Director, Trivedi Centre for Political Data. Saloni Bhogale and Mohit Kumar assisted with the data. Views are personal.

05/22/2019 Lifestyle Comments Off on Lok Sabha elections 2019: What assets, occupations of political hopefuls tell us
India