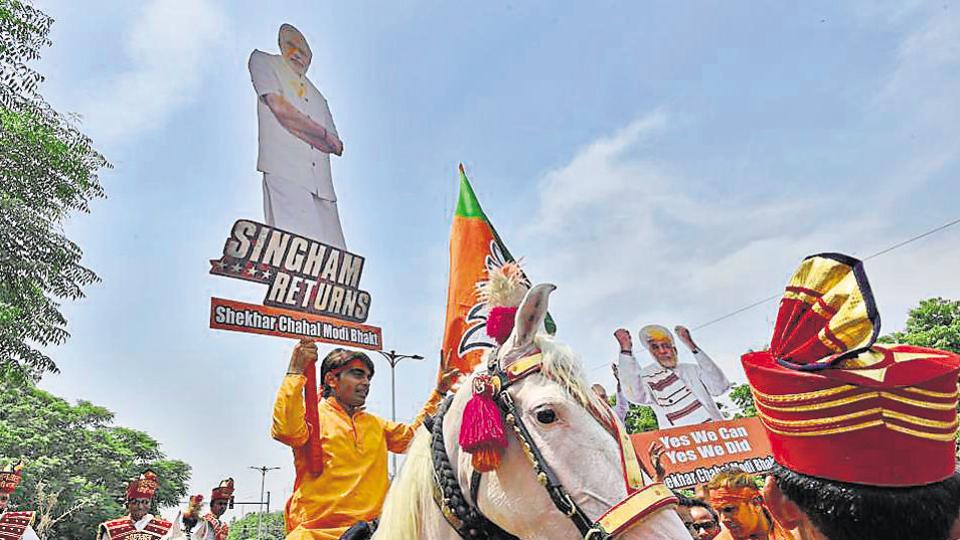 Nationalism as an election issue appears to have struck a chord with the voters and became a major factor in Prime Minister Narendra Modi’s return to power at the Centre.

It seems to have also helped the Bharatiya Janata Party (BJP) bounce back from the loss of power to Congress in Madhya Pradesh, Rajasthan and Chhattisgarh towards the end of last year. The BJP won 61 seats out of 65 in the three heartland states, where it lost assembly polls just five months ago.

The BJP was able to successfully build a narrative around nationalism and articulate its policies around a “Nation First” theme, leaving little space for opposition parties like the Congress, which had shown signs of revival on the back of issues like agrarian distress, unemployment and promises like farm loan waiver.

The BJP’s aggressive nationalism pitch helped neutralise critics who tried to take it on over alleged security lapses that could have led to the car bomb attack in Jammu and Kashmir’s Pulwama on February 14. The attack left 40 paramilitary troopers dead and prompted India to carry out an airstrike on a terrorist camp in Pakistan’s Balakot on February 26.

Also read: What the next 5 years hold for key leaders

The airstrike appears to have been the turning point in shifting the focus to nationalism and national security from issues like farm distress and lack of jobs, which helped the Congress wrest power from the BJP in the three heartland key states.

BJP strategists say they were able to address concerns about the farmer distress through measures like the Pradhan Mantri Kisan Samman Nidhi (PM-KISAN) scheme while keeping the focus firmly on national security.

PM-KISAN was announced in the interim budget on February 1 ahead of the national polls, promising small and marginal farmers an annual Rs 6,000 in transfers to their bank accounts in three instalments.

Party strategists focussed on national security even in the face of criticism.

BJP president Amit Shah claimed that 250 terrorists were killed in the Balakot air strike even as the Indian Air Force was guarded about putting a number to the casualties.

The statements of BJP leaders like Shah drew flak from the Congress and other opposition parties for politicising the armed forces. But they kept the national security debate going to the BJP’s advantage.

Wing commander Abhinandan Varthaman’s release and return to India two days after he was captured when his jet was downed following a dog fight along the :Line of Control with Pakistani fighter planes, too, was perceived as a success of the Modi government.

Modi managed to keep the issue alive even two months after the Pulwama attack. He spoke about the coordinated bombings on Easter Sunday in Sri Lanka and compared the situation there with that in India before he came to power in 2014. He said he was committed to “India First” and giving “a response to terrorists in the language they understand”.

Modi spoke about the Sri Lanka attacks that left 257 people dead again at a rally in Maharashtra on April 22. He underlined that security was the key to prosperity. Modi tried to link security and prosperity in several other public meetings.

The BJP’s focus on welfare programmes was also linked to security; the party stressed that all these measures were possible because India was “secure and in strong hands”.

Modi also made it a point to address the nation on March 27 when India shot down a satellite in low-Earth orbit with a groundto-space missile in the first test of such weaponry. Opposition parties questioned Modi over his address to the nation, but the BJP believes it helped maintain the party’s focus on security.

At an election rally in Meerut, Modi underlined the essence of his campaign when he said he had shown the courage to carry out surgical strikes, be it on land, in the sky or space.