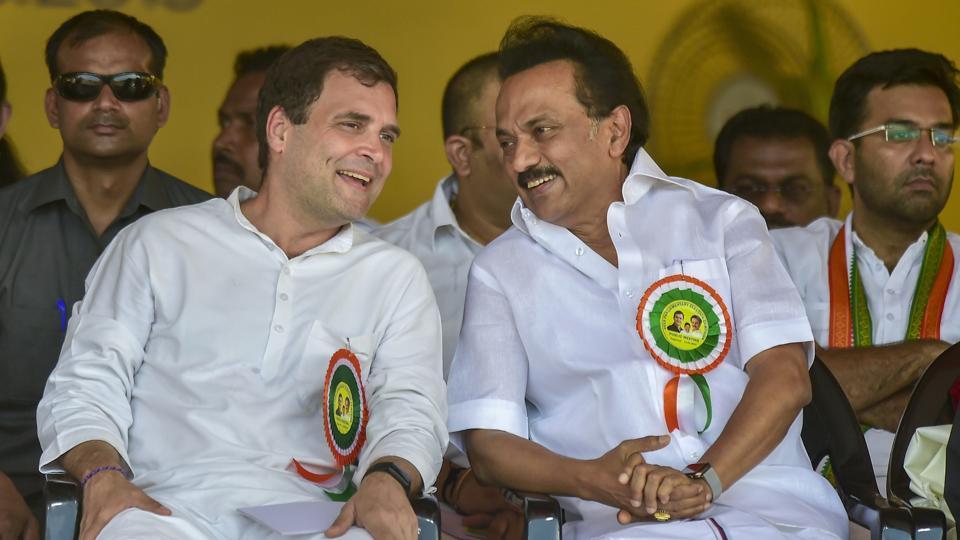 Making a near clean sweep in the Lok Sabha election, the opposition DMK is on the road to win 37 of the 38 parliamentary constituencies for which elections were held as counting continued across the country.

However, the Dravida Munnetra Kazhagam’s ambition of dislodging the AIADMK government of Edappadi K Palaniswami appears to be distant as the ruling party is ahead in ten of the 22 assembly segments for which by-polls were also held.

Polling for Vellore Lok Sabha seat was cancelled by the Election Commission following a large scale distribution of cash and seizure of a huge amount of money.

While the DMK and the Congress drew a blank in the 2014 Lok Sabha election, the AIADMK had won 37 seats with the remaining two shared by the BJP and the OBC-Vanniyar dominant PMK, as part of the NDA. This also came after successive defeats in the Lok Sabha elections and the 2016 assembly poll, this victory has resurrected the political fortunes of the DMK.

Most of the exit poll on Sunday had put the DMK far ahead of the ruling AIADMK.

While the AIADMK is maintaining a slender lead only in Theni, where deputy chief minister O Panneerselvam’s son OP Ravindranath Kumar is the party candidate, it is on a downward slide in all the other Lok Sabha seats. It is the same case with the Bharatiya Janata Party (BJP) as well.

The BJP is trailing in all the four seats it had contested. In Kanyakumari, Union minister Pon Radhakrishnan is lagging behind his Congress rival HL Vansanthakumar and the party’s state president Tamilisai Soundarrajan is also behind DMK’s Kanimozhi in Thoothukudi.

The DMK’s former Union ministers A Raja (Nilgiris), TR Baalu (Sriperumpudur) and Dayanidhi Maran (Central Chennai) are ahead of their rivals.

The two left parties are also comfortably placed in the four constituencies – two each – they are contesting as part of the DMK alliance.

In the by-poll for 22 assembly seats, the DMK is leading in 12 and the AIADMK in ten. To retain power in the 234-member legislature, the AIADMK, which at presents has only 110 MLAs, requires only eight more.

In the neighbouring Puducherry seat, the Congress is ahead of its rival All India NR Congress.

05/23/2019 Lifestyle Comments Off on Lok Sabha election result 2019: Mixed bag for DMK; AIADMK set to stay on in power in Tamil Nadu
India

Jaishankar raises US visa delay, Blinken says sensitive to it

Alia Bares Her Heart Of Stone