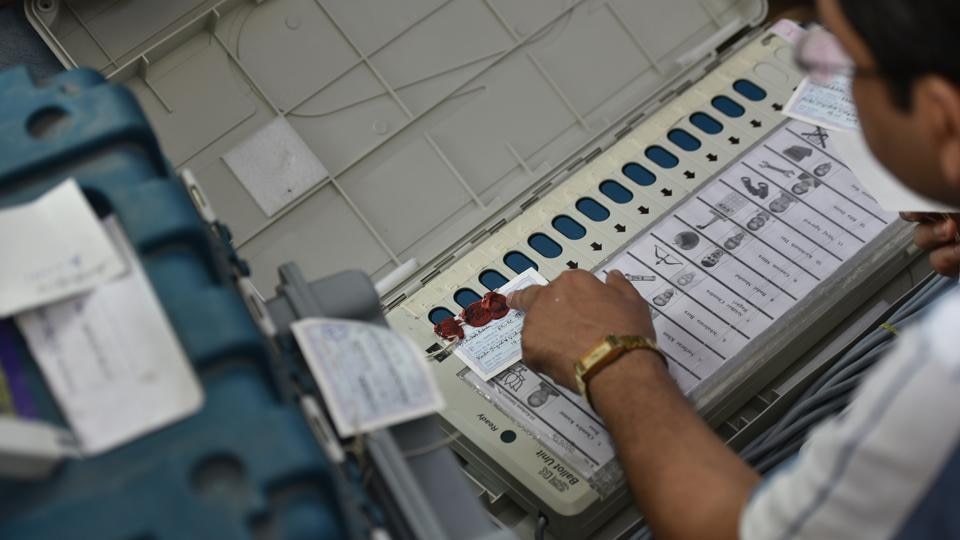 The marathon seven-phase Lok Sabha election held over 39 days involving as many as 900 million voters came to a close on Sunday, beginning a countdown to the announcement of results on Thursday.

Officials of the Election Commission will count the votes cast across one million booths in all the 543 parliamentary seats spread across the country on Thursday. The date and place of counting votes are usually fixed at least a week before the schedule of the election is announced.

Casting and counting of votes have become relatively less cumbersome as compared to the old paper ballot system since the 2004 Lok Sabha election, when EVMs were first introduced.

However, this year auditing the paper trail through Voter Verifiable Paper Audit Trail (VVPAT) machines, which is being used for the first time in a Lok Sabha election, is expected to delay the announcement of results. This tallying will be done after the Supreme Court’s order to increase random matching of VVPAT slips with Electronic Voting Machines (EVMs) from one booth to five booths in every assembly segment.

Here is all you need to know about the process of counting of votes:

Who counts the votes?

The counting of votes is done under the supervision and direction of the returning officer of the constituency and in the presence of the candidates and their agents at the venue. The Election Commission also appoints its observers to oversee the process and ensure transparency. The poll body also nominates counting staff.

No other person, except the returning officer, counting staff, candidates and their agents, public servants on duty and others authorised by the commission can enter the counting venue.

What happens inside the counting room?

A number of tables are set according to a pre-decided floor plan inside a counting venue. The number of tables depends on the number of polling stations, space available, number of counting agents, number of counting staff, including micro-observers, and security concerns. According to rules, one hall cannot have more than 14 counting tables, but there have been exceptions. During the Lok Sabha election in 2009, 25 tables were allowed with the commission’s prior approval, given the counting hall was big enough. In addition to this, there is one table each for the returning officer and observer. The candidates or their agents are allowed to sit with the returning officer on their table to watch the counting process.

Each table has a paper knife to break open the seals on the Electronic Voting Machines (EVMs), a loudspeaker to announce the result and a blackboard for information about the trends in counting to the media.

Central security forces guard the counting venue in the inner perimeter and state police on the outer perimeter. Security personnel are not allowed inside the counting hall.

The counting of votes will take place in special and secured booths under the close supervision of the returning officer and the poll observer. The VVPAT counting rooms will be set up in every polling booth and will be surrounded by a wire mesh to keep unauthorised people from accessing the paper slips.

The counting process will be recorded on video by the authorities, recorded and sealed in a cover for future reference. No video still or camera of journalist or media person will be allowed inside the counting hall. Hand-held cameras of media persons with valid passes can be allowed to take a general view. They cannot be allowed beyond a certain demarcated line or a string put for this purpose. The votes recorded in EVM cannot be captured by any camera, including the official devices. The actual votes recorded on an EVM or ballot paper cannot be photographed or covered by any audiovisual coverage.

No one is allowed to use a mobile phone inside the counting hall, except for the observer appointed by the poll watchdog.

How are votes counted?

The counting starts with postal ballot papers and those on EVMs begins after 30 minutes. Before the counting of votes begins, the polling staff and agents inspect EVMs before opening them to ensure that the control unit has not been tampered with and all seals are intact. If the seal is disturbed, the commission has to be informed.

The EVM is powered on and the seal over the result button is pierced. The button is then pressed and it displays the total number of votes recorded for each candidate at a particular polling station.

The selection of the five EVMs in every assembly constituency — there are 4,215 across India— will be done by a draw of lots in the presence of all the candidates. When the five EVMs are chosen from each of these segments, it would increase the VVPAT verification percentage from 0.44 to around 2%. The VVPAT system enables EVMs to record each vote by generating a slip.

The Election Commission’s guidelines say if there is any discrepancy in the vote count between EVMs and VVPATs, then the paper trail will prevail.

These EVMs are resealed after counting for one round is finished. The returning officer waits for two minutes and any candidate who believes there has been a discrepancy can ask for a recount during this period. Whether the appeal to recount is valid is decided by the returning officer.

If there is any discrepancy, it is resolved and then the returning officer seeks the observer’s clearance and declares the result and reports it to the Election Commission.

The returning officer declares the result when they are certain that the counting has been successfully completed.

After the result has been ascertained, the control unit of EVMs is resealed with the seal of the returning officer as well as the commission. The resealing is done in a manner so that the result recorded in the control unit is not erased and it retains the memory.