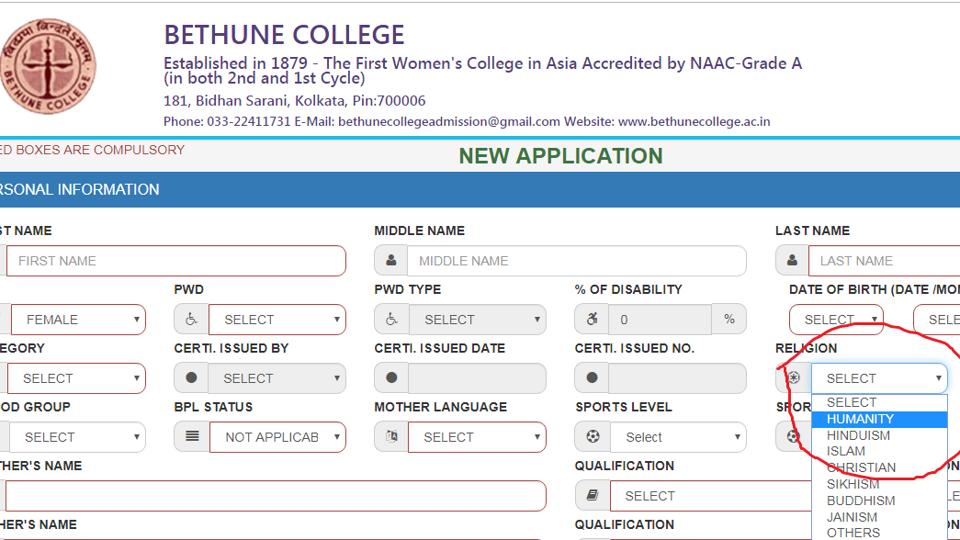 In a bid to spread a humanitarian message, Bethune College in Kolkata included ‘Humanity’ as an option in the ‘Religion’ section of the college admission forms, an official said on Friday.

Established in 1879, the first women’s college in Asia has taken a noticeable step by keeping ‘Humanity’ as the first option in the ‘Religion’ tab of their online application forms for the undergraduate admission process that started on May 27.

“We have noticed that some youngsters don’t want to disclose their religion. There were options like ‘non-believer’ but we thought that humanity is something that all the religions talk about. Humanity is above every religion,” Mamata Ray Chaudhuri, Principal of the college which functions under Calcutta University, told IANS.

She said it is better to have faith in humanity rather than becoming a non-believer at a young age.

The college alumni and students welcomed the step.

“Being an ardent believer in humanity myself, I would really like to congratulate the college authorities for coming up with such a progressive initiative. Such a step will hopefully restore faith in mankind and help us accept the heterogeneity of views,” Ananya Sasaru, a former student of the college, told IANS.