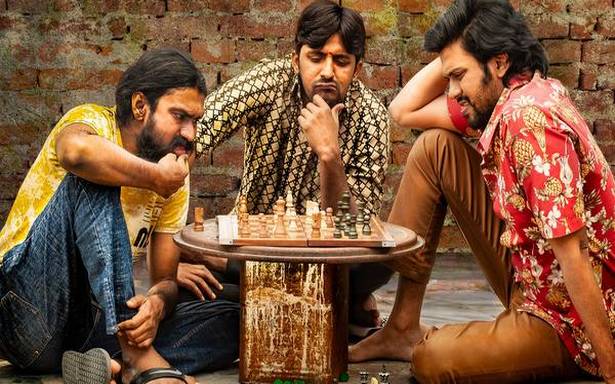 When the teaser and trailer go viral and keep viewers in splits, there’s always the possibility of the film not meeting expectations. Thankfully, Jathi Ratnalu delivers to a large extent and the irreverent fun can help beat the pandemic fatigue.

Of late, a few Telugu films have been going on a hyperlocal mode and capturing the ethos of different regions of Telangana and Andhra Pradesh. Debut director Anudeep shows us the laidback life of three hopeless youngsters in Jogipet, Sangareddy district. A kid watches them arguing and gossiping on his way to school in the morning; when he heads home after school, the trio is still there doing the same thing! Jathi Ratnalu

Srikanth (Naveen Polishetty) is embarrassed to be called ‘ladies emporium Srikanth’, the store which his dad (Tanikella Bharani) established in his name, and wants a white collar job so that he can be Cyberabad Srikanth. When he challenges his dad that he will land a cushy, respectable job and leaves for Hyderabad is a canary yellow Maruti 800, his childhood buddies tag along. Sekhar (Priyadarshi) has a karmic connection with the pressure cooker whistle and nothing gives him more joy than rice that’s perfectly cooked. And Ravi (Rahul Ramakrishna) is mostly inebriated and unlucky in love.

The trio’s adventures begin the moment the car, mounted with bedding and a huge straw basket (wonder what’s in it) heads to Hyderabad. Nothing goes as per plan and soon, Anudeep sets the stage for irreverent characters to keep popping up. He wants us to take absolutely nothing in the story seriously.

The Jogipet boys find shelter in a plush apartment. No, the story isn’t about the NRI house owner discovering them. Srikant falls in love with his neighbour Chitti (newcomer Faria Abdullah), but this story isn’t limited to a Jogipet guy speaking broken English falling in love with a girl from a well-to-do family. It’s a joy ride till the trio gets entangled in a crime involving politician Chanakya (Murali Sharma).

The fun wears out in the latter half and the one liners get repetitive. The wafer-thin plot also doesn’t do justice to the issues that crop up along the way, like the corruption in the sports ministry or the predicament of a local electric company owner. The plot gets stretched in all directions, not making much sense.

However, Jathi Ratnalu redeems itself in the final courtroom portions and Naveen, who is the backbone of the film, makes every little expression and dialogue count. His brilliance leaves the judge (Brahmanandam) baffled and us, in splits. Naveen’s is a sparkling portrayal and giving him good company are Priyadarshi and Rahul, dependable as always.

Rahul’s phone conversations and his refrain of threatening to leave his friends by playing the victim card are hilarious. Faria has a good screen presence and holds her own among the three madcaps. There could have been more to Priyadarshi’s characterisation than his fixation with the rice cooker.

The film could have been shorter and meandered less in the post-interval portions. Despite that, the film packs in a lot of fun. Radhan’s music and the cameos of Brahmanandam and Vennela Kishore add flavour to the Hong Kong noodles. Why Hong Kong noodles? The film has the answer to that.