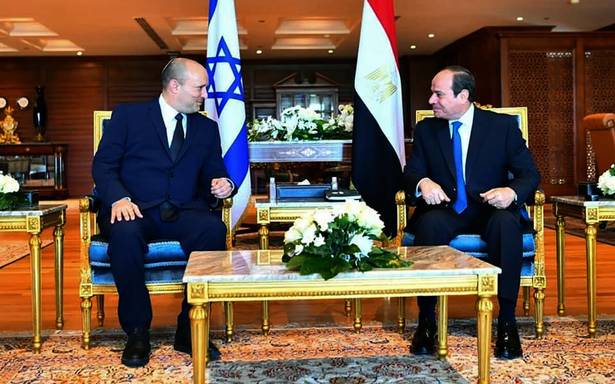 The leaders discussed maintaining the ceasefire in the Gaza Strip, in addition to Ethiopia’s dam on one of the Nile river’s tributaries

The leaders of Egypt and Israel met on September 13 as part of the first official trip to Egypt by an Israeli Prime Minister in over a decade, and rising tensions in the Gaza Strip at the top of their agenda.

Gaza is sandwiched between Israel and Egypt, and both countries have enforced a border blockade of the territory to varying degrees since 2007 when the Islamic militant group Hamas took control there.

Mr. El-Sissi and Mr. Bennett met in the Red Sea resort town of Sharm el-Sheikh, according to an official statement from the Egyptian presidency. Egypt’s state television showed both leaders sitting side by side in front of both of national flags, with the Israeli army’s Chief of Staff and Egypt’s Foreign Minister and the head of its intelligence service also in attendance.

It was the first official visit by an Israeli Premier since 2010, when then Egyptian President Hosni Mubarak hosted a summit with Mr. Netanyahu, Palestinian President Mahmoud Abbas and U.S. Secretary of State Hillary Clinton. Less than a year later, Egypt was rocked by a popular uprising that toppled Hosni Mubarak.

Mr. El-Sissi told state television that he and Mr. Bennett discussed maintaining the ceasefire in the Gaza Strip, in addition to Ethiopia’s dam on one of the Nile river’s tributaries, which Egypt sees as a threat to its water supply.

The Israeli Premier, in a statement following the meeting, said he thanked Mr. El-Sissi for his country’s role in stabilizing Gaza and its help with Israeli missing and captives from Israel’s conflict with Hamas.

Over nearly a decade, Israeli officials have held covert meetings with their Arab counterparts, some of which were only announced after the fact. Egypt in 1979 was the first Arab country to reach a peace agreement with Israel, but only after the two countries fought four wars between 1948 to 1973.

The meeting is a boost for Mr. Bennett, who took office in June and is still trying to establish his foreign-policy credentials. His predecessor, Benjamin Netanyahu, billed himself as a global statesman but never was able to hold a public meeting with the Egyptian president.

Egypt has often served as a mediator between Hamas and Israel in the four wars they have fought, most recently in May, when it brokered a cease-fire that has largely brought the fighting to a stop. Egypt has been trying to make that into a long-term truce, but those efforts appear to have run into trouble in recent weeks. Hamas has demanded a lifting of the blockade, which has devastated Gaza’s economy. Israel wants Hamas to free two captive Israeli civilians and to return the remains of two dead soldiers killed in a 2014 war.

In recent weeks, in a sign of rising tensions, Hamas has staged a number of violent demonstrations along the Israeli border and launched dozens of incendiary balloons across the frontier, setting off a series of wildfires in southern Israel.

Earlier this month, Mr. El-Sissi also held talks with King Abdullah II of Jordan and Abbas in Cairo, where they stressed support for the elusive two-state solution to the Palestinian-Israeli conflict. The three leaders said the Palestinians have a right to an independent state, with east Jerusalem as its capital, a plan that Israel staunchly opposes.

But Israel has praised the Egypt for its help over the years, and in turn allowed Egyptian forces greater freedom near the border to fight Islamist insurgents in the Sinai peninsula.

Egypt’s government usually walks a careful line with its own citizens, who deeply oppose Israel’s policies toward the Palestinians. As Egyptian and Israeli officials quietly collaborate on security, the Egyptian government is rarely strongly critical of Israel in public. However, the government gives free rein to prominent personalities aligned with the government to denounce Israel or portray it as the enemy in the media.

Most recently, the escape of six Palestinian inmates from a maximum-security Israeli prison elicited praise from many Egyptians. Over the weekend, Israel caught four of the fugitives. In response, Palestinian militants in Gaza launched several rockets into Israel, prompting retaliatory Israeli airstrikes.

“There are no grudges between Egypt and Mr. Bennett. Egypt is willing to listen to a new Israeli voice especially in light of regional tensions,” he said.