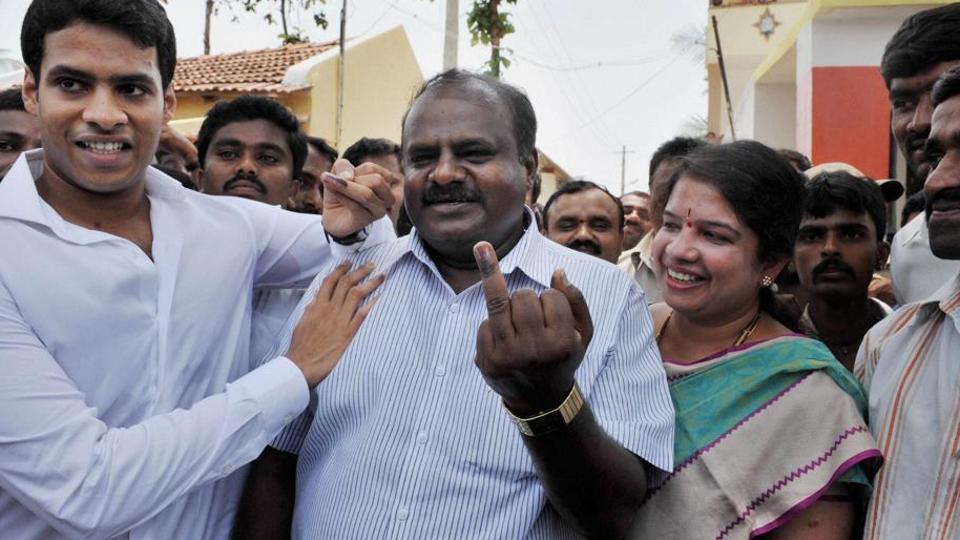 Voting is long over in Mandya but the election fever continues to grip the region, with people feverishly discussing possible outcomes. The seat witnessed a high-octane battle between chief minister HD Kumaraswamy’s son Nikhil of the Janata Dal (Secular) and independent candidate Sumalatha Ambareesh, wife of the late film star and former Union minister MH Ambareesh.

Intrigue, political brinkmanship and public theatre characterised the battle in the seat, which recorded a highest-ever turnout at 80%. The contest also created rumblings within the state’s ruling coalition after some JD(S) leaders alleged that local Congress leaders were working to defeat Nikhil.

In Sangapura village, residents said a sense of fatigue was setting in after the high-pitched battle. Mariswamy Gowda, 60, said there was only one choice for him, JD(S). “We cannot vote otherwise, we vote for [former prime minister HD] Deve Gowda.” he said.

Others appeared to have based their decision on local factors. In Nagamangala taluk’s Avverahalli village, residents said the support for Sumalatha from local Congress leaders had swayed some voters to her side. However, they insisted that the region was loyal to the JD(S).

The battle has even driven a wedge in family ties. Brothers Ravi and Shivaraj Kumar support the Congress and JD(S), respectively.

Closer to the city of Mandya, Sumalatha is the clear choice. Nisar Ahmed, a mechanic from Hodaghatta village, said he had voted for Sumalatha. “The JD(S) won all eight seats that come under the Mandya Lok Sabha constituency last year, but precious little has been done. We need to show them that they cannot take us for granted,” he said.

At Yaraganahalli village, one word was enough to encapsulate what was at stake in Mandya, “pride”. Sandeep, a 25-year-old farmer, said this election was only about protecting Mandya’s pride. “The JD(S) fielded an outsider in Nikhil, couldn’t they find anybody from Mandya?”

Political analyst Narendar Pani, faculty at the National Institute of Advanced Studies, said field visits before polling on April 18 had suggested that the popular mood was against Nikhil. “It will be interesting to see if district pride, as was witnessed in Mandya, can be a decisive factor in national elections,” he said.

05/21/2019 Lifestyle Comments Off on In Mandya, prestige contest may be decided on ‘local pride’
India