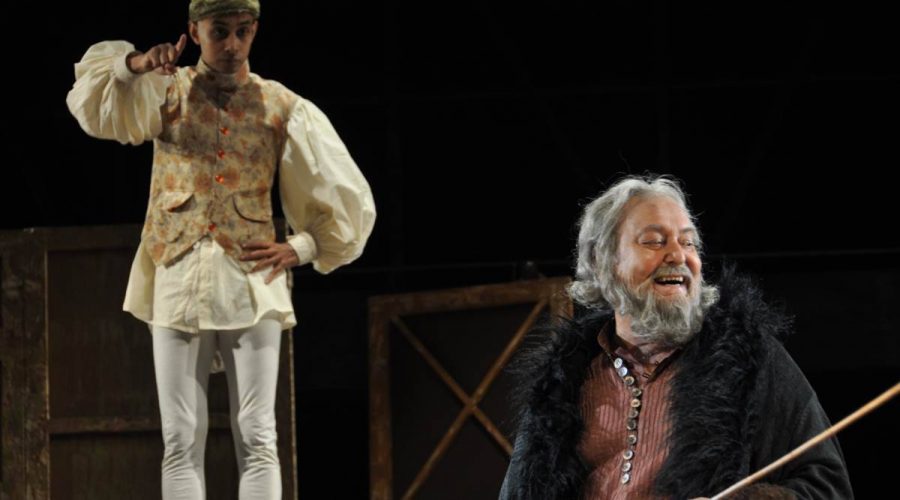 When Soumitra Chatterjee played King Lear, his disappointment at being called ‘cinema actor’, and why the Bengali commercial theatre chapter comes to a close with the thespian’s passing The weight of this sad time we must obey…The oldest hath borne most. We that are young/ Shall never see so much, nor live so long.

When Minerva Repertory Theatre, which was under the aegis of the West Bengal government, was planning a gala Shakespearean reproduction, they thought of Soumitra Chatterjee. The actor spoke of his great desire to do Hamlet when he was young, but “Now I’m too old for Hamlet. The character which I can do is King Lear,” he said, adding that he’d do it only if Suman directs.

Soumitrada had watched my earlier plays. So, when I was approached, I felt immensely honoured. While I had done Coriolanus (adapted by Brecht) when I was very young, this was going to be my first pure Shakespearean play to direct. And, this was technically the first time Soumitrada worked under another stage director (he directed his own plays).

The (then CPI-M) government had provided a non-AC white Ambassador car for the director and main actor. Every day, Soumitrada, who lived in Golf Green in south Kolkata, would pick me up from Beckbagan in central Kolkata where I lived, and then for three hours, round trip, to and from Minerva Theatre in north Calcutta, we would chat about myriad things: about Lear, Satyajit Ray’s stories, Soumitrada’s other films, poetry, editing of Ekkhon literary magazine, relationship with other actors, his guru Sisir Kumar Bhaduri – I can write a book on those discussions. While I was introduced to him in my youth, I came to know the man, his perception, cultural depth, only after I started working with him in Raja Lear (2010).

Theatre, unlike cinema, has long rehearsal periods. We rehearsed Lear for three months, from 10 am to 6 pm. Since it was a repertory production, there were full-time, paid actors, nobody with any outside job. Soumitrada made himself available fully, not taking on any film work.

Lear is a very physical performance. I got some of the younger actors to first choreograph Soumitrada’s movements because I didn’t want to make him move very much. It was a multitiered stage design, he had to walk up the steps many times. When I told him about the choreography, he said, “I don’t want to watch, please tell me what I’ve to do.” All he’d ask for was a small stool to sit on when he couldn’t get up after sitting on the floor during the storm scene, and a one-hour afternoon rest. During other breaks/off-time, he would regale others with anecdotes.

At the rehearsals, I took notes on actors and acting, which I shared with the cast before we dispersed for the day. I told Soumitrada that I’d give his notes to him separately, but he insisted on sitting with everyone on the stage and hearing them. He had no fake ego or starry tantrums. 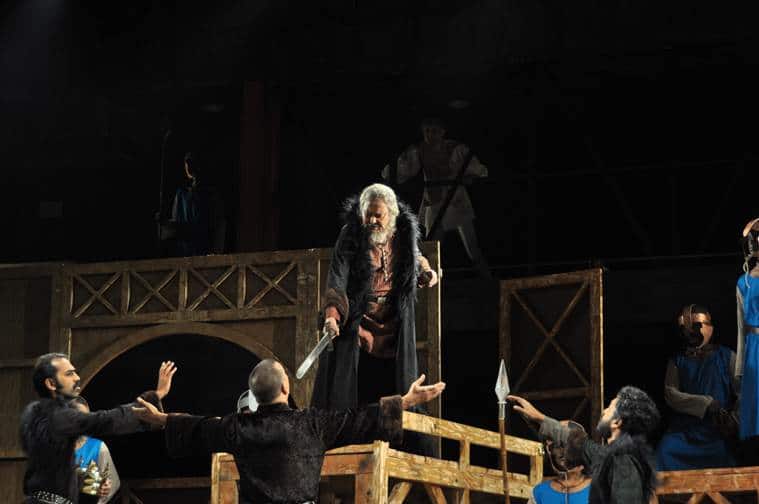 He was curious, investigative and engaging, worked on his dialogues, made sketches, doodled on his script, on the characters, wrote poetry, that was my learning. Every note, every feeling, every new thing, he’d write down on his script. One morning in the car, he showed me a sketch, and said: “look, this is the face I saw of Lear in my dream”.

He’d arrive three hours before each performance, after doing his make-up, changing into his costume, 15-20 minutes before the play, he’d go sit in the background darkness, alone, contemplative. The first day when I went to shake his hands to wish him good luck, he said, “eyi Suman, parbo toh, hobe toh (Will I be able to do it)?” “Soumitrada,” I replied, “you’ve really worked hard for three months, of course, it will happen.” He was never complacent, never over-confident. That uncertainty is an artiste’s real, true spirit. In spite of being a long-standing successful thespian, he always had that sense of uncertainty of creativity.

Lear was him, he got personally attached to the character. Every day, after the performance, he’d say, “I feel completely blank.” Lear dies at the end, after him dead, there are almost six-seven minutes of the play remaining before the curtain comes down. He’d always say, “In those moments, while lying there on the stage floor, I feel that I’m hanging in some strange place, I know not what that is.” Since it was his dream role, he gave everything possible into the making of the character.

He had just one grudge. He’d say, “People always talk of me as a cinema actor, but I never stopped doing theatre. Even the intellectuals don’t highlight my theatre acting. Why?” That was his deep anguish. He was doing theatre continuously, right until the lockdown. The acting, his candour, physicality, his rumbling voice, his cadence, pronunciation, towering presence, he would make a small stage/space look bigger. If he was on the stage, you’d not look at anybody else. 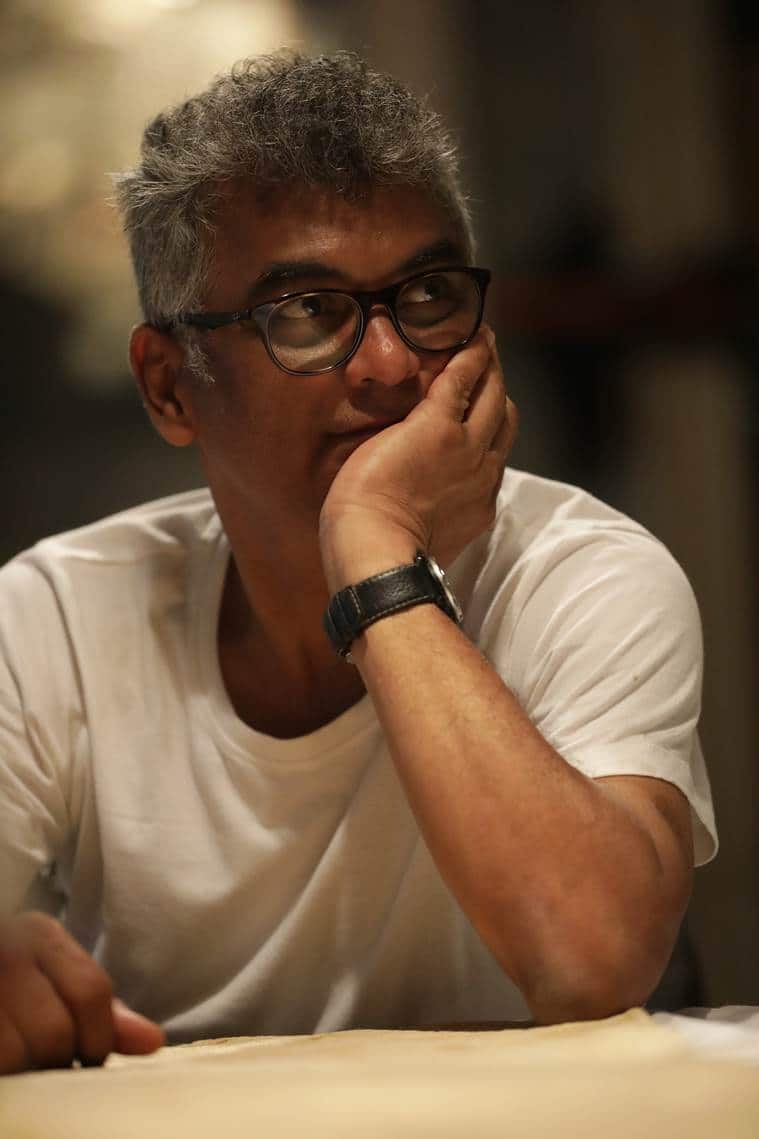 His peak was when he was on a mission in the 70s-80s, doing back-to-back professional stage plays and reviving theatre. Bengali stage theatre was divided between the north Kolkata professional board/theatre in Hatibagan, that produced plays using full-time, paid actors and drew mofussil/village audience, and the free “group theatre” (IPTA offshoots) producing ideology-based, socially-relevant plays attracting the middle-class intellectual. Soumitrada single-handedly pulled up the commercial theatre of north Kolkata from the slime and grime. From the medieval old-style, sentimental acting and film stars’ naach-gaana to modern realistic acting (learnings from Satyajit Ray films), and the concept of total theatre (set design, lighting design, etc.). That is now completely gone. Soumitrada did great adaptations of European and American plays, from Nilkantha (Ivan Turgenev), Bidehi (Henrik Ibsen), Tiktiki (Anthony Shaffer’s Sleuth) to his struggling middle-class man in Naam Jibon (Errol John’s Moon on a Rainbow Shawl).