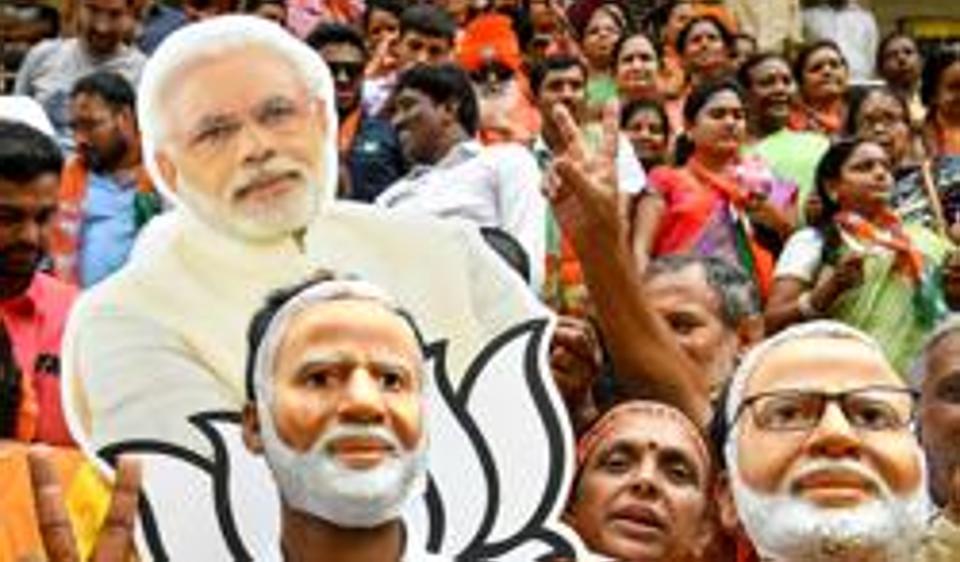 It was Friday evening, a day after the general election results. At former Prime Minister Deve Gowda’s south Bangalore residence, there was a sullen silence when grandson Prajwal Revanna arrived with his mother Bhavani and father Revanna, a minister in the coalition government of Karnataka. Prajwal, 28, who won the only Janata Dal-S seat of the 28 Lok Sabha seats in the state, had offered to resign the day before, so his grandfather could fight again in a by-poll. The JD(S) patriarch, who lost to the Bharatiya Janata Party’s (BJP) GS Basavaraj at Tumakuru, refused, and Prajwal was in Bangalore to pacify him. Gowda’s other grandson, the Chief Minister’s son Nikhil Kumaraswamy, lost in Mandya yet another JD(S) safe seat to actor Sumalatha Ambareesh, the first Independent to win in the state in 50 years.

With the BJP winning 25 out of the 28 Lok Sabha seats in Karnataka and increasing its vote share to 51.4% from 43% in 2014, both the JD(S) and the Congress have much to worry. In the 2018 assembly elections, the BJP won only 36% of the seats. How did it get from there to this massive mandate?

Interpreting the vote of this state of 60 million people in 30 districts is a complex matter, but four factors stand out:

1. The vote for vikas: In 2014 just as it is known to do, Karnataka bucked the national trend. While the rest of India rooted for Modi, it gave the BJP only 17 out of the 28 Lok Sabha seats, two lower than in 2009. However this time, the BJP added eight seats to its Karnataka kitty: Chikkodi, Kalaburagi (earlier, Gulbarga), Raichuru, Chamarajnagar, Tumakuru, Chikkaballapur, Kolar and Chitradurga, each, until now was a Congress seat. The verdict of these regions, especially the backward Hyderabad-Karnataka belt, is clearly a rejection of a party that did not deliver on infrastructure, unemployment and water crisis in a drought year. The coalition’s failure to meet these demands drove disgruntled voters into the arms of the BJP, especially after they compared themselves with their counterparts in regions such as Dakshina Kannada and Udupi.

2. The caste vote: As much as the intelligentsia would want the caste element in elections to die, it only gets stronger with each election. In Karnataka, who or which party the powerful Lingayats, followers of the 12th century saint Basavanna, vote for, has often decided who gets to go to Parliament or the assembly. Forming 17% of the state’s population, the Lingayats are known to have blessed different parties at different times. During the era of Ramakrishna Hegde (three-term chief minister between 1983-88), they sided with the Janata Dal; during the time of Veerendra Patil (1968-71, 89-90) with the Congress and in the time of BS Yeddyurappa, with the BJP.

3. The Balakot factor: If the Pulwama attack turned the tide in favour of Narendra Modi decisively across the nation, Karnataka was no exception. The Dakshina Kannada coastline has been a Hindutva laboratory; north Karnataka caught up this time with the nationalism narrative. In addition, the BJP was the first to cash in on the viral power of mass media as a campaign tool, aided by low-cost Internet and mobile phones. The Congress was caught napping.

4. The unsulliable Modi factor: One factor that emerged across Karnataka is the refrain that “People did not look at the candidate’s face, they voted for Modi.” In other words, the candidate’s own performance, background or corruption charges against the BJP’s leaders was immaterial, only Modi mattered. Referring to the unmatched brand power of the prime minister built by the party that has had voters in a spell, a senior journalist from north Karnataka quoted this Sanskrit quote in jest, that until now only a mother had such an unimpeachable image that Modi seems to now occupy: “Ku’putram bhavaniyam, ku’mata na bhavishyati’ (A bad son can be born, but a bad mother cannot be.)

Vasanthi Hariprakash is the founder-editor of Pickle Jar, a people-led media collective