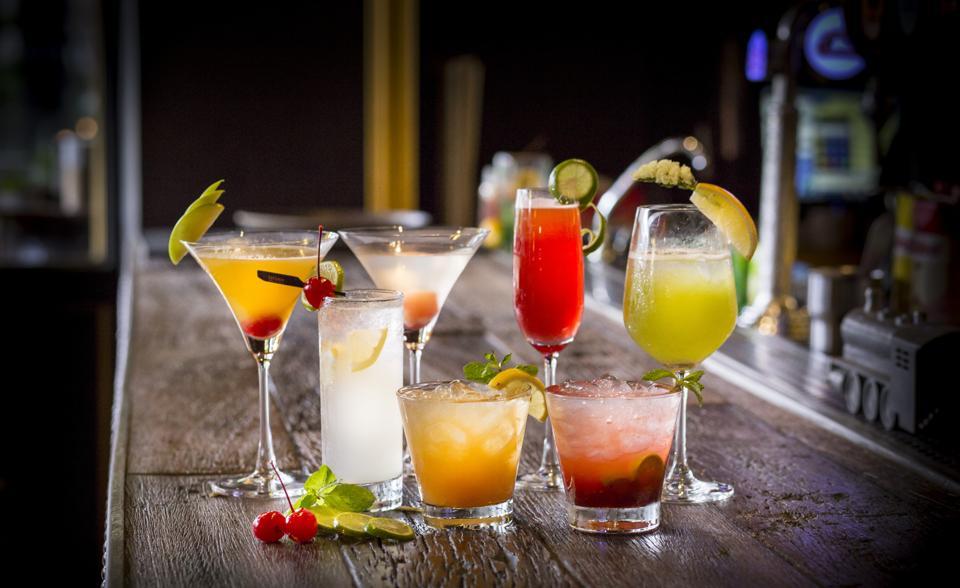 No one knows for certain where the word cocktail originated, although people have their favourite stories. One theory is that the name was derived from a mixed drink called a coquetel, served to French officers in the southern states of America during the American war of Independence. The most popular theory is that the cocktail was the product of the American Prohibition era. This seems unlikely as cocktails were mentioned in a magazine article as far back as 1806, long before Prohibition was introduced.

The British claim the word comes from the dregs drawn from the very bottom of barrels of spirits and known as “cock-tailings”. My favourite version is that they were the invention of an enterprising Irish American innkeeper, Betsy Flanagan, who decorated her creations with gaily- coloured feathers from fighting cocks. Apparently, a very appreciative French customer found himself so delighted by his unusual drink he raised hi glass and toasted: “Vive le cocktail”.

Whatever your own favourite take as to its origins, there is little doubt that the cocktail reached its peak of fame during the 1920s when Prohibition was in full swing in America. The one factor which did more to promote the popularity of the cocktail than any other was the enactment of the 18th Amendment to the American Constitution in 1919. It ushered in 13 years of prohibition on the sale of alcoholic drinks in the United States of America. In order to stay one jump ahead of the beady-eyed police, the owners of ‘speakeasies” disguised the appearance of alcoholic drinks (and the rather rough taste of bad moonshine liquor) with shrubs and cordials and accompaniments, served in unconventional glassware. The cocktail soared in popularity. And, of course the fact that alcohol was illegal added to the glamour of the cocktail bar.

In recent years, the popularity of cocktails has grown beyond the disguise for alcohol and beyond the reputation of being a “girls’” drink. Bartenders are now called mixologists and are all about inventing new and tempting drinks to delight the palate and the eye.

Modern day cocktails may be fun or sophisticated, simple or exotic, a pick-me-up or a relaxer and I have noticed that while everybody has their set favourite drink, more and more people like to experiment with a cocktail especially when it is made with local ingredients.

In recent years, I have been very fortunate to have stayed at Belmond hotels. In India, this is a little known brand of international luxury hotels, which offers bespoke experiences, amazing locations and top -of -the-line service.

Although their iconic Italian hotel Cipriani makes the best Bellini in Venice, their signature cocktail, Buonanotte (Goodnight) invented by George Clooney while he was apparently in need of some spiritual upliftment one night, is quite the ‘pick-me-up’ before dinner. The Mist on the Rice Paddies (signature cocktail from the Eastern and Oriental Express from Singapore to Thailand) is a delicious concoction of an unusual ginger liquor called Domaine de Canton and Sake.

The one that blew my socks off was the Kampot Pepper Martini at the tropical oasis Belmond La Residence D’Angkor at Siem Reap, Cambodia. Local gin and fresh green peppercorns are muddled with local passion fruit and a bit of lime and sugar. The result is so good that you can easily down three without realising it. Sitting in their delightfully ‘Hemingway-esque’ Martini Bar overlooking the most lush flora and fauna, the Kampot Pepper Martini tastes ever better. All the worldwide signature Belmond cocktails are available at most of their properties. So I could be sitting at Belmond La Residence d’Angkor and having a Mist on the Rice Paddies!

Muddle 20 fresh green peppercorns inside the cocktail shaker.Combine the gin, passion liqueur, lime juice, sugar syrup into the shaker. Add ice and shake well.Strain the drink and pour it into the martini glass. Add half the passion fruit inside the glass and decorate the tray with the garnish.

Culinary expert and explorer Karen Anand has been writing extensively on the subject of food and wine for 30 years. Apart from having her own brand of gourmet food products, she has anchored top rated TV shows, run a successful chain of food stores, founded the hugely successful Farmers Markets, and worked as restaurant consultant for international projects, among other things. Her latest passion is food tours, a totally curated experience which Karen herself accompanies, the first of which was to Italy.

This is a fortnightly column. The next edition will appear on May 26.

05/25/2019 Lifestyle Comments Off on Gourmet Secrets: Tracing the history of today’s drink of choice… the good old cocktail!
India