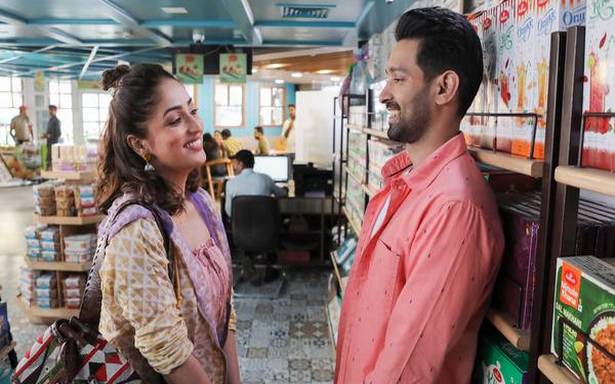 A few fun lines apart, there’s nothing refreshing about the Bollywood romcom on Netflix

“We are very modern,” Satnam aka Sunny Sethi’s (Vikrant Massey) father (Rajiv Gupta) insists. He adds to good effect, “We have an automatic car and mobile phone with 4G.” This, when matchmaker Shobha Juneja (Ayesha Raza Mishra) calls him outdated for not thinking about whether the bride-to-be might have her own career dreams, as opposed to partnering in the family’s restaurant business that’s yet to take shape.

A few such witty segments perk up the unlikely romance between Sunny, and his school-time crush Ginny (Yami Gautam) who he always thought was too good for him. One never knows. All it takes is a mother who can sense that her daughter isn’t moving on from a now-yes now-no confused relationship with her ex and hopes that an unassuming Sunny can win her heart.Ginny Weds Sunny

It’s matchmaking season on Netflix, where this Hindi film streams. Unlike matchmaker Seema from the web series who goes through catalogues to choose prospective brides and grooms, Shobha (her agency is called ‘Rishte hi Rishte’) has a track record of arranging 100% successful marriages. She takes Sunny under her wings, with the consent of his parents, and sets him up to trail Ginny.

Can love be arranged? The parents and Sunny hope so. The Delhi and NCR romance nods to many things synonymous with Punjabi families — from the popularity of Baadshah and Mika Sigh numbers to lines such as ‘we Punjabis are left with emotions and paneer’ (Navjot Gulati and Sumit Arora share the writing credits).

However, apart from a chuckle here and there, the fun fizzles out after a point. The film has a slim storyline and once Ginny’s ex, Suhail Nayyar as Nishant, halts the budding romance between Sunny and Ginny in its tracks, the rest of the film is extremely predictable. And boring. There’s nothing much the charming leads can do. Vikrant and Yami are convincing in their given characters but these aren’t their best performances.

Shobha Juneja gets some good moments in the film and shines through.

Most wedding rom-coms may not aim to create a lasting impression but try to entertain you while it lasts. But Ginny Weds Sunny felt long and tiresome even with its 125-minute duration.